Among my first missions as a one-time-comic-devotee making my return to the medium after a half-decade long bout of “too-old-for-it” syndrome was a headfirst dive into the modern Avengers continuity. In the span of little under a year, I marathoned my way from Bendis’ If-It-Ain’t-Broke-Fix-It-Anyways Disassembled and New Avengers arcs through Hickman’s Smarter-Than-You-And-He-Knows-It Everything Dies epic, assisted greatly in this pursuit by a part time job and a now apparent, then subconscious desire to irreparably damage my vision. The highs were certainly high. But amidst those narrative peaks were (as always seems to be the case with the most populist super-series) extended lulls, thick with formula and familiar caricature; a pattern that is at once comforting and (especially when consumed in such a highly condensed fashion) predictable to the point of stagnation.

Mark Waid and Mike del Mundo’s take on The Avengers could not stray further from this pattern. Through their first three issues on the title, the creative duo has delivered a stirringly original take on the team without sacrificing an ounce of their familiarity or characteristic heroism. 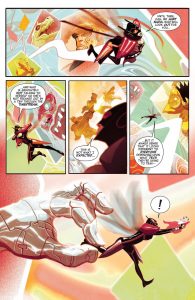 The knee-jerk impulse when seeking to deconstruct the success of this new Avengers run is to credit del Mundo’s artwork; and that isn’t a bad place to start. Ever since his event-winning stint alongside Jason Aaron for Secret Wars’ Weirdworld, del Mundo has deliberately danced around the fringes of mainstream comic art, consistently pushing the boundaries of what qualifies as “a fit for the Big-Two.” In The Avengers #3, the artist offers a master class in meticulous surrealism, at once bending the laws of physics and physiology to contort his heroes across the edge of a psychedelic timescape, all the while layering them and their environments with refined, minute detail. His deployment of transparent borders allow for a fluidity from character to character, form fit to render the hallucinatory time-slipping of The Wasp and her fellow Avenger’s conflict with Kang and his compatriot also-Kangs over the stolen baby Kang (every bit as confusing as it sounds. Don’t let that scare you away!)

But we cannot disregard Mark Waid’s essential impact this new run, especially in the ways his narrative plays to del Mundo’s strengths. In The Avengers #3, the author makes the most of Kang’s inherent temporal pardoxy, diving deep into the well of FantaScience to produce a chapter full of layered contradiction that enthralls without overwhelming (at least not to the point of distraction). Waid has long since proven himself a master storyteller, regardless of the medium, and here he offers nothing less than his best: high stakes sans emotional catastrophe; insurmountable odds met with just the right mixture of Spider-wit and gravitas. 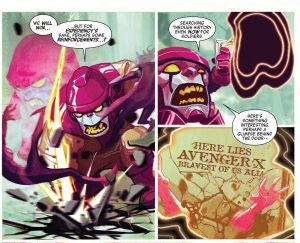 Intrigue rears its head beyond the border of two moments, both in the midst of this pitched battle between the Kangs and the Avengers: In the first, as Vision falls prey to a crafty maneuver by an All-Head-No-Body future Kang, he finds himself immune to the time-traveler’s powers, uncertain as to the reason. Later, as the same Kang searches the time-stream for displaced reinforcements, he encounters a vision (pun intended?) of a gravestone marked “Avenger X, Bravest Of Us All” from which a pair of notably-synthezoid-esque arms reach towards us. Horror sweeps across the conqueror’s face, but a swift shield to the oversized-dome pulls our attention back to the present conflict.

Things wrap up about as neatly as can be expected from there, thanks to some quick thinking from Nadia Pym; but the groundwork has been laid for what promises to be an expansive, potentially continuity-altering series of adventures going forwards. So long as Waid and Del Mundo are at the helm, Earth’s Mightiest Heroes look to be in for a wild ride.

Verdict: If you’re not into gorgeous art, well-crafted storytelling, or are one of the six people who still can’t get over the fact that Thor is a woman now, probably best to steer clear. But for the rest of us, this is an absolute Buy.