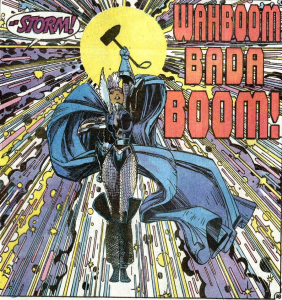 There was a time in my life where I couldn’t wait for the next X-Men event. I know that sounds ridiculous today as we live in an era of oversaturation of events, where publishing goals are linked to the next event and the next event and so on. Yet back in the late ‘80s events were special and there was nothing better then the X-Events. By the late ‘80s Chris Claremont had been guiding the lives of Marvel’s mutants for a decade and in my opinion was at the height of his game. The Uncanny X-Men was the best selling book in comics and this was a time when the X-Books could do no wrong and when the X-Events began in earnest.

The Uncanny X-Men has always been a book about building plotlines, which usually culminated in an anniversary issue or over an extended issue arc. It was one of the drawing factors to the title since longtime readers were rewarded with a payoff, like the death of Jean Grey in the Dark Phoenix Saga or the use of Rachel Summers from the Days of Future Past storyline. Then Marvel started to publish more X-Universe books, first with the New Mutants and then later X-Factor. So the plot threads started to bleed across the books and Marvel decided to begin a yearly or every other year X-Event that drew many plots to a conclusion while launching others. Of course Marvel being Marvel they began overusing the concept but in the first few years these X-Events were epic and a whole lot of fun to read.

As I’ve been reminiscing about past events as of late I decided that I was going to rank my five favorite Claremont X-Events from the late ‘80s into 1990.

The X-Tinction Agenda was the last great Claremont orchestrated X-Event. By this time in Marvel publishing history the young artists who would go on to form Image were taking over and art was front and center over story but I still enjoyed this event. The X-Tinction Agenda dealt with Genosha, the island nation that enslaved mutants and used them as servants. The event was focused on the abduction of several X-Men and New Mutants who were taken to Genosha and forced into labor. The combined teams of the X-Men, X-Factor, & the New Mutants (now under the tutelage of Cable) invade Genosha to retrieve their friends and end the enslavement of mutants. I loved the Jim Lee art in the Uncanny X-Men issues but I also enjoyed seeing the entirety of the X-Universe back together since it had been some time since that had happened. There was gravitas to the event as several mutants were removed from the X-Universe for some time and longtime New Mutant Warlock lost his life. I recently reread the X-Tinction Agenda and I enjoyed it for the ability to take me back to that time in comics but it also noticeable that this event really ended the Claremont driven era of the X-Men as it shifted soon after to the Blue and Gold squads, the New Mutants became X-Force and X-Factor went from being a book about the original five X-Men to being a government sponsored mutant response team. But for one final moment the X-men were all under one roof and it felt like a wrap up for my favorite era of the X-men.

Inferno was a roller-coaster ride of an event. The basis of the event is that Magik (Illyana Rasputin) of the New Mutants has lost control of Limbo and two demons, S’ym and N’astirh, plan for the final corruption of Madelyn Pryor and Illyana as well as the demon invasion of earth. As the event progresses the X-Men are influenced to attack the Marauders (more on them later) as they seek revenge for death of countless mutants. It also delves into whom Madelyn Pryor really was as well as her deal with the devils to find her son Nathan who was being held by Mr. Sinister at the time. Inferno gets complicated as it deals with the Madelyn Pryor and Jean Grey connection, which is finally resolved as Madelyn’s final fate is decided and Nathan ends up with his father for a short period of time. The New Mutants story was separate from the Uncanny X-Men and X-Factor issues but no less compelling. During the Inferno the New Mutants were fighting for the soul of their teammate, Illyana, from fully succumbing to her demon side aka Darkchilde. Illyana’s brother Colossus arrives in time to help in the fight. It was an entertaining tale and the reunion between Colossus and Magik was nice but short-lived. What I really liked about Inferno was that every book set in Manhattan, which was most of them, were impacted. Marvel collected these issues in the Inferno Crossovers Omnibus, which is almost as much fun as the core X-titles.

The Mutant Massacre was the X-Event that set the ball rolling for yearly X-Universe crossovers since it was such a success. I remember being aghast at the carnage present in this event. I shouldn’t have been with the word ‘massacre’ present in the title and that the entire premise of the books was that the Marauders entered the Morlock tunnels to kill them. The Morlocks were constant support characters in the X-Books, sometimes as Allies and sometimes Antagonist but by this point in X-Men history Storm was their leader and it was her responsibility to protect them. So as the Marauders slaughter the Morlock people the X-Men, X-Factor, Power Pack, Thor, and New Mutants descend into subterranean Manhattan to put an end to the killing. I read the Mutant Massacre as the issues were released and was amazed at how traumatic it was to our heroes. At the end of the event many of the X-Men are injured so badly they need to be transported to Muir Island for care and rehabilitation (which also conveniently sets up Excalibur). To me the most tragic injury was Angel, who had his wings clipped and later amputated, which will set him on a course of action that won’t be resolved for years.

The Mutant Massacre was also notable for the Sabertooth- Wolverine fights littered throughout the event. This predates the two’s constant battles that were a staple in the X-Universe comics for decades and it was highly enjoyable to see the two unleash upon each other, hence why Uncanny X-Men #213 is my favorite issue of the event. Many threads were created during the Mutant Massacre that would play out for years in the X-Books, most notably the clipping of Angel’s wings, which would lead us to…

The Fall of the Mutants was a different take on an X-Universe event since the three main X-books didn’t actually crossover with one another. They shared similar themes as they all dealt with tragedy and metamorphosis of the teams. The New Mutants at this time were under the care of Magneto, who had been left in the charge of the Xavier School for Gifted Children when Professor Xavier went to live in the Shi’ar Empire. I’ll be honest this is a weak period for the New Mutants title as the students were aligned with Bird-Brain, who was a semi-sentient creature created by the Ani-Mator. The New Mutant issues deal with them dealing with not only the Ani-Mator but also an anti-mutant group known as the Right as well as questioning having Magneto as their professor. These three issues are the most forgettable of the event. The Uncanny X-Men issues were a lot of fun as the team travels to Dallas to deal with Freedom Force and Forge as well as a plethora of creatures from time and space. The title also dealt with Forge and Storm’s rocky relationship and the return of Storm’s powers, which she had been stripped of several years before. By the end of issue #227 the X-Men had a new status quo and mission statement that would play out until the end of the X-Tinction Agenda. To me the best part of the Fall of the Mutants were the X-Factor issues. It was not only the return of Apocalypse and his Four Horsemen but also the introduction of Warren Worthington first as the horseman death and later Archangel. I loved the Archangel character design and it was such a transformation from the high-flying Angel of X-men past. Apocalypse is a formable adversary and as the event wraps up what X-Factor’s mission statement was is completely changed.

I loved this storyline. I read my copy of the Uncanny X-Men Annual #9 so many times it fell apart and I had to seek out another copy. It wasn’t just the gorgeous Art Adams artwork but it was also two of my favorite comic franchises merging with the X-Men and Thor (although Thor himself is absent). The story actually begins with X-Men and Alpha Flight #1 & 2 when Loki gifts mortal men and mutants with Asgardian powers so they may bring peace to earth. Among those gifted are Cyclops and his then wife Madelyn Pryor, which brings the X-Men to Canada where they join forces with Alpha Flight to decide what course of action they should follow. Of course with Loki everything isn’t as it appears and tough decisions are made as the God Like powers are eventually given up, causing Loki to plot revenge. These were fun issues, especially since it reteamed Chris Claremont with Paul Smith, who was one of my all time favorite Uncanny X-Men artists and it was a delight to see him design new Asgardians for the 2 part mini-series. Loki’s revenge is revealed first in the New Mutants Special #1 and the Uncanny Avengers Annual #9, both by Chris Claremont and Art Adams. The crux of these two issues is that the X-Men and the New Mutants are both transported to Asgard where some are gifted with powers while others are not. Loki’s main goal is to assume the throne of Asgard and his plan is to replace Thor with a powerless Storm, whom he forges a hammer for. These two issues were beautiful. Back in the day it was a yearly treat to get Art Adams Uncanny X-men annuals as he drew #9-12. Art Adams is a treasure to the medium and these two issues are some of my favorite work of his.

So those are my five favorite X-Events from the late ‘80s and 1990. Since then there has been an X-Men driven event almost yearly from Marvel and some have been good, others have been bad but it is now a constant. It’s nice to take a walk down memory lane and escape back into a time when my collecting days were young and comics still had an awe inspiring quality to them. Feel free to join in and share your favorite from this time period and if you haven’t read them then I recommend picking up a little X-history.