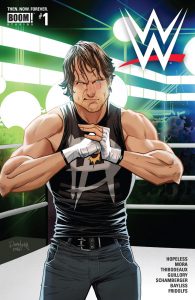 I’ve been watching professional wrestling for close to three decades now, so to say BOOM Studios’ WWE: Then. Now. Forever. #1 is up my alley is kind of an understatement. Not every reader is required to come into this issue with that level of knowledge about the squared circle necessarily, though being a big fan of this stuff–especially the more recent goings-on in the WWE–certainly helps. You won’t see a lot of familiar faces or names in this book if you’re more of a causal viewer of the sport or haven’t watched at all. There’s content to be enjoyed no matter what, but ultimately this is a comic made for wrestling fanatics. And that’s both a good thing and a bad thing when it comes to this issue.

Rather than focusing this issue (which in and of itself is a precursor to an ongoing series simply called WWE starting in December) on a more widely-known WWE star like John Cena or Triple H, writer Dennis Hopeless chooses Seth Rollins, a name probably recognizable only to those that currently follow the product. But ironically, it is those same individuals that will then find little emotional attachment to the issue as it unfurls around an actual storyline from WWE TV back in 2014 (involving a group known as The Shield) because they have already seen the ending played out in real life. I’ll be curious to see how the proper series progresses and whether or not Hopeless can add a few wrinkles along the way to keep even diehard fans guessing.

Thankfully, though, what Hopeless is able to do in-between the setup and the conclusion of his narrative is a heck of a lot of fun and full of plenty of weird surprises. Who knew, for instance, that The Shield really liked to BBQ shirtless on top of a WWE production trailer? And I had no idea that Dean Ambrose took his potato salad so seriously, too. It’s the silliness of these scenes that shows Hopeless understands his source material doesn’t take itself too seriously, and neither should the reader. Similarly, the backup story provided by Ross Thibodeaux involving The New Day traveling through time to find positivity in wrestling is fantastic. It’s so on-brand with those performers that I would love a separate spinoff book with just their adventures.

Dan Mora handles the art for the main story and imbues these muscle-bound characters with a mixture of realism and cartoony exaggeration. Basically the perfect way to draw professional wrestlers in other words. Staying on the more exaggerated front, Rob Guillory’s art for Thibodeaux’s time-traveling backup tale is also a perfect marriage of artist and writer that actively captures the brilliant lunacy that is the New Day. There’s also a brief endcap of smaller stories included with this issue as well, the most noteworthy of which is illustrated beautifully by Rob Schamberger and contains a poignant message the (hopefully) inspired kids who may pick this comic up.

Check It Out. WWE: Then. Now. Forever. #1 takes a storyline from the world of professional wrestling and somehow manages to make it even more silly and dramatic. Current wrestling fans that recognize names like Seth Rollins or Dean Ambrose will get the absolute most out of this title, but that leaves casual and non-wrestling fans without a lot of recognizable personalities to latch onto.