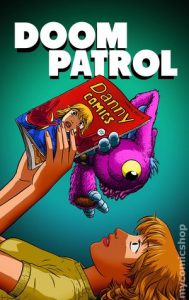 Getting the Doom Patrol back together is shaping up to be a lot like herding cats. While one or two may be on the right track the rest are transporting off to the negative space, being captured by villains or finding out about their secret origin through comics.

Something to address right away is the rather slow burn of the comics story. Often times a book with little to no forward motion becomes boring and gets phased out of a reader’s pull list.  Doom Patrol is an anomaly in more ways than one. For instance over the course of the last three issues a lot has been going on however our lead characters have not physically moved very far. This is due in large part to the amount of cutting around that the issues do. Between visiting the Chief having flash backs and seeing elements of stories yet to come the book has a lot going on. It’s all just going on at once and probably won’t all fit together until much further into the run. While the long game doesn’t always pan out if done well it has the ability to keep a reader interested in not just one but all of the stories a writer has to tell.

Doom Patrol doesn’t read, look or feel like anything else coming out right now. Of course from the outside it looks no different from any other comic. Then a reader sits down, opens it and realises that this is not going to be a traditional story. The book has so many little things to pick up on. In the first issue the reader saw a character that is only just now showing up in the actual story. There are conversations about our place in the universe and identity. The book at no point just comes out and takes any kind of stand on big ideas but it does explore them and plant the seeds for things to come.

Before diving into Casey’s history a quick format note. Fore a couple of pages we have the opportunity to read a comic within a comic. While in Dannyland Casey comes across a strange comic shop and inside she picks up an issue of “Danny Comics”. The comic costs one smile and its cover reads “New Inside! Your answer to everything Casey!” The issue details Casey’s creation both as a comic character and then her inexplicable taking of human form. This is a super interesting idea because Danny already crates streets, buildings, and the people the that inhabit them. So it stands to reason that he would create entertainment (like Danny Comics) for his citizens as well. There is some light and fun meta text to be had with the unintended consequence of creating an actual comic book hero from a comic in a comic. There’s also some life imitating art vibes with in the world of the story to pick up on.

Nick Derington and Tamra Bonvillain are one the the best art teams working in comics right now. Derington is drawing a multitude of unique characters and imagery that ranges for fantastic to frightening. In one panel we see Larry and the Negative Spirit being pulled into three pieces. One that is obviously the negative spirit then there is a strange version of lairy where we can see his skeleton through his skin. finally there is a horribly burned and damaged lairy there with a silent scream frozen on his face. Bonvillains colors are what pull everything together. In the comic where Casey learns her history the from of the comic changes and the pages look like aged four color comics. Befor that casey takes an amusement park style boat ride through a brief history of the Doom Patrol. The art teams renderings of theses seminal moments are both cute and creepy. The art throughout has good timing and is well placed especially during more tense moments. Sometimes using as few as four panels to show the crossing of an entire park.

Verdict Buy. The book would appear to have everything going for it. Solid art team, good writer and the freedom it needs to utilize both of those things to their fullest. This is another solid issues of Doom Patrol that isn’t afraid to explore big ideas like identity and where we come from through silly things like comics or comics within comics. As long as readers have the time for it the book is going to keep moving right along at the pace that it deems as working at its best.