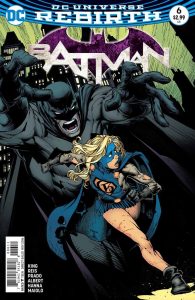 Darn it this issue was supposed to be about Batman, but after this issue I would love to see a series on Batman’s D-list villains, Kite Man anyone? King uses these wacky Batman ’66 style characters, to bring levity to what is a powerful and emotional comic.

In various interviews King, has stated that his work in the CIA and Iraq has influenced his work in comics, and it is certainly evident in this issue. King delves into the aftershocks of tragedy, and how loss and grief can affect someone, which is at the core of Batman as a character. Throughout the issue Gotham Girl is speaking to her deceased brother, while she stops Colonel Blimp and these off the wall characters. It is proof of the excellence of King’s writing, that the reader is more drawn to Gotham Girl’s turmoil, than the craziness that surrounds her.

Furthermore, what really hit me is how much King understands that Batman isn’t just a bruiser but is a compassionate hero – see Jason Todd – as throughout the issue he is trying to reach out to Gotham Girl and it is their talk on a rooftop (where else would it be in a batman comic?) that touched me. King uses Gotham Girl’s struggle, to hold a mirror to what makes Batman the hero people love. Equally this issue got me intrigued in the next arc and understanding Batman’s motivation going into it, which is the point of an epilogue issue as well as to end the arc.

Reis’ art is, as usual, great at capturing both the emotional beats and action, with both the inkers and colourist making Gotham city seem alive at night. At some points there is too much shading on faces, but as a fill in artist team it hasn’t dropped Finch’s standard on the book.

Buy. King gives a touching take of dealing with loss and a friend trying to help out and relate no matter what. This is a beautiful thing to read, especially in a batman book where, in recent years, he has been more about these epic events. All this as well as slipping in some obscure villains we would never normally see. Let’s hope King keeps up the good work.