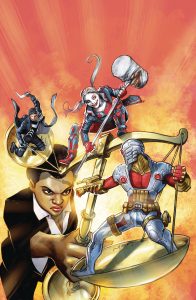 The current conception of Suicide Squad took root in 1987, when writer John Ostrander created Amanda Waller’s character and wrote all 66 issues of the first ongoing title series. Over the years DC has brought Suicide Squad back in different forms, including a current ongoing title written by Rob Williams and penciled by Jim Lee. Suicide Squad: War Crimes Special #1 is a stand-alone story that brings Ostrander back to write the team he helped establish.

The story begins in New York City with a European superhero team capturing fictional former U.S. Secretary of Defense George Carmody and taking him to The Netherlands to stand trial for war crimes he is responsible for overseeing in the Middle East. Amanda Waller convenes a reluctant Suicide Squad made up of Rick Flag, Boomerang, Deadshot, El Diablo, Harley Quinn and Mad Dog to capture Carmody and return him stateside before his trial. What follows is an extended human smash-and-grab story.

Ostrander’s writing in this issue will feel familiar to fans of his original Suicide Squad work, with at least one scene that echoes his first arc from that run. There’s the mayhem and comic relief you’d expect, and the characterizations mostly work well, with Waller and some squad members (Boomerang, Rick Flag, and Harley Quinn) getting substantially more love than the others. The fairly straightforward plot has a few twists along the way. The art from Gus Vasquez and Carlos Rodriguez and colors from Gabe Eltaeb mostly work well with Ostrander’s writing, with a few moments that outshine it.

While this story is fun, it feels like a missed opportunity for something greater. The premise is rich with potential to explore political themes that Ostrander mostly leaves alone, and the reader never gets a glimpse of what the mission means to any of the characters beyond a job they are forced to do. Rick Flag, who fought in the war Carmody is being held to account for, goes no further than a passing mention of this fact. The irony of the Suicide Squad’s mission becoming necessary because a European counterpart followed their MO on American soil, along with the moral implications of the mission, go largely unexplored. The ending feels forced, and the final twist doesn’t completely make sense. Some of this is a factor of the story being limited to a single issue, and some of it comes down to Ostrander’s preference in this case for a story that is more light than cerebral. It’s too bad he didn’t find a better balance between the two.

Verdict: On the fence. There is plenty in this issue to enjoy, especially for fans of Ostrander’s original Suicide Squad work, but the lack of depth is a disappointment.