Every genre has its tropes. Croak #1 by Alterna Comics is a horror story that is laced with typical 80’s and 90’s horror movie tropes. It then attempts to deliver a shocking “WTF” moment at the end, and for the most part it succeeds in what it is trying to do.

The basic premise of the story is that three friends go camping, arriving at the camp site well after dark. After hiking for an hour trying to find a particular spot and failing, they decide to set up camp. No surprise, no one grabbed the tent. I fail to see how they walked for an hour and no one realized they didn’t have the tent, but that’s okay. After deciding to sleep with the stars and a failed scary story by a camp fire, things go terribly wrong. 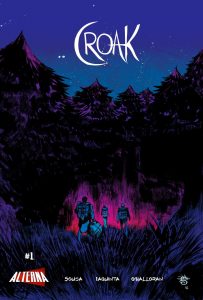 There are some flaws with this book that can’t be ignored. The dialogue at times doesn’t feel like real conversation at all. The fight that broke out when the realization occurred that they forgot the tent was pretty corny and felt forced. Of course, some of this can be blamed on it being a first issue. It has to balance some setup/character development while also moving the story forward at an appropriate pace.

The art in the book was solid. It captured the appropriate tone that this book needed. It helped suck you in. The only issue was a few pages where the panel layout was confusing which caused a needed reread before moving on. Unfortunately, with a book like this anything that draws you out when the story had you sucked in become a buzz kill.

While this issue does have its flaws, the tone and pace of the book keep you eagerly turning the pages. The ending comes suddenly and in a way that almost shellshocks the reader, but is ultimately rewarding as well. Again, flaws aside, it was shooting for a “WTF” moment at the end, and it delivered on that.

The question moving forward is going to center on what the book tries to be. There is enough in the story and art of this book that will remind people of Wytches by Scott Snyder. If that is the route that this book is going to take, I don’t think it can succeed because it just isn’t on the same level.

However, if this book embraces its flaws, it has a chance to be very special. It feels like a campy 80’s or 90’s B-movie horror film. The successful movies of that time embraced their flaws and as a consumer it is fun to point them out, snicker, and then pee yourself because something jumped out unexpectedly and scared you to death.

Check it out, if this is a genre that you enjoy in comic form. Croak #1 is not a perfect book. However, it is memorable and leaves the reader wondering what is going to happen in the next issue.