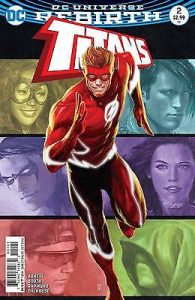 Right from the outset, Titans #2 kicks it into high gear and never slows down. This is a fast-paced action-centric issue that still manages to get in its fair share of character moments and interactions, which has been an essential part of rebuilding this team. Dan Abnett’s script doesn’t put the crew any closer to discovering the truth about the missing chunk of time in the DCU, but what it lacks in forward momentum it definitely makes up for in straight-up superhero shenanigans. It’s issues like this one that make me wish Titans was a twice-monthly shipping title because I know there’s still so much more craziness to come and I want it now.

Jumping off of last issue’s reveal of the villainous Abra Kadabra running amuck in Keystone City, Titans #2 opens on a different yet oddly similar Titans team. You’ve got Dick Greyson there but he’s dressed like Robin for some reason. Roy Harper is also on the team but he’s going by Speedy, not Arsenal. At the center of it all is Wally West, back in his traditional yellow costume. What is this madness? If you guessed that this is a team of younger Titans doppelgängers being controlled by Kadabra that our actual heroes will need to topple, then guess what? That’s exactly what this issue is and it’s pretty great. It’s a lot of superhero punching for sure, but there are some generally surprising moments, like Roy kinda-sorta confessing his love for Donna Troy. Maybe.

I feel like a broken record in saying this, but the look of Titans each month is part of what is making this series feel so alive with every issue. Brett Booth and Norm Rapmund are able give each character such a kinetic energy that it makes the whole issue feel like it’s running at full speed, and the panel layouts are constantly shifting and moving with the action on the page. Andrew Dalhouse and Carrie Strachan’s colors compliment the pencils and inks so well, too, with palettes that are super bright and vibrant. There are a couple of instances of body parts moving in a way body parts probably shouldn’t move, but it’s only a minor detractor from an otherwise bombastic-looking book.

Buy! Titans has been a wild ride ever since the DC Rebirth began and this issue takes things even further with an assembled squadron of Titans doppelgängers from the past. Seeing each member of the current team square off with their younger self (like Arsenal vs Speedy) is a lot of fun, and the banter between all the characters is consistently entertaining. While this series is still a long way from actually solving the case of the missing time in the DCU, it’s quite a bombastic ride so far. Brett Booth and Norm Rapmund’s art continues to add to the pure electricity of this title with this issue being particularly action-packed right from the outset.