The Boom! Studios series of Mighty Morphin Power Rangers comics have so far been knocking  it out of the park. The creative teams of Kyle Higgins and Hendry Prasetya on the main series and Brenden Fletcher, Kelly Thompson, and Daniele Di Nicuolo on the Pink Ranger series have taken full advantage of the chance to tell new stories and deepen characterizations. They’re the same Power Rangers fighting the same battles, but they’re more like real teenagers with real problems.

The MMPR 2016 Annual gives six creative teams the chance to put their own spin on Power Rangers, and they go after the chance with gusto. Each stories is very different, covering a wide range of characters and art styles. Since they’re so different, I’m going to review each story separately and then give my overall impressions. 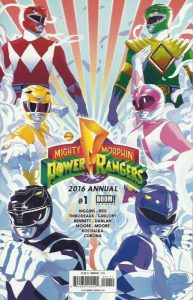 Kyle Higgins writes the main MMPR comic, so his story follows the same sensibility: teenagers with busy schedules who have to fit monster fighting in with their normal pressures. The story focuses on Jason and what he does in a normal week. Each page chronicles a day, and he has to balance school, martial arts, his leadership duties, and monster fighting. He does so without ever complaining, but the strain does show. Reis’s art, especially on Jason’s increasingly haggard face, tells the story beautifully, to the point where we barely needed text.As I’m a huge fan of Higgins’ series, this is perhaps one of my favorites in the annual.

Bulk and Skull are the great mainstays of Power Rangers, showing up in more episodes than any of the heroes. They begin as bullies, but slowly, in fits and starts, progress into true heroes who can stand up against the forces of evil. And that’s exactly what they do in this story. The Rangers are captured by a monster, so Bulk and Skull are recruited by Zordon (using “spare change” from his planet) to become the Purple and Orange Rangers. We immediately find out that is what happens when true “teens with attitude” get superpowers. This story is full of injokes and broad physical comedy… so, basically, the perfect Bulk and Skull story. My only disappointment is that they’re not the Mauve and Puce Rangers, which are the colors they themselves chose in the show during one of their fantasies.

Margeurite Bennett is one of the best writers in comics right now, and her favorite stories are ones about women, so while it’s not surprising that her story focuses on Trini and Kimberly, it is the exact story that I wanted. Trini and Kimberly are attacked during an outdoor catered fundraiser by one of Rita’s monsters, who quickly turns Kimberly into a rabbit. (By this point, I was already sold.) And like my favorite work of Bennett’s, DC Bombshells, the trick is not to show another fight, but to show how Trini finds a nonviolent way of solving the situation. It’s especially important to me that Trini is the lead in this story: she as a character is often relegated to Billy’s lab assistant or Kimberly’s friend. There are few stories where she gets to shine. Besides the writing, Danlan’s art makes this story the most visually striking and beautiful of the six stories. The pages are awash in pastels, and Trini and Kimberly seem to be floating in a watercolor painting. It makes me want this creative team to do a whole series of just these two Rangers.

So, I’m kind of a big fan of Goldar. He’s not an incredibly complex character as presented in the show, but that means he’s a fun character to form head canons about. Where did he come from? Why did he switch loyalties from Rita to Lord Zedd so quickly? Imagine, then, my joy when I realized we were getting a Goldar backstory comic. This story, taking place before the events of MMPR, shows Goldar and his older brother Silverback being called before the mysterious Lord Zedd, whose recently had some sort of magical accident that left him severely injured… This really is my favorite out of the six stories. While it doesn’t delve too deeply into Goldar’s psyche, it does show more complexity to his character, and the art (Terry Moore doing art that I’m not used to seeing him doing) does justice to the dark and brutal world Goldar inhabits..

This story is adorable and fun. While Tommy and Kimberly debate over whether they should feel sorry for Putties, we find out that a Putty has fallen in love with Kimberly… or at least fighting with Kimberly. The art is very simple, more like a web comic than any of the other stories. It’s not exactly complex or striking, but it does provide a zany counterpoint to the heavy Goldar story before it.

Guys, I really tried to like this one. The story begins with a little girl wanting to see the Rangers fight, and she gets separated from her mother. The Rangers, unmorphed, then rescue her as Zordon ruminates on heroism. The intentions are good, but the story is stretched thing with too many elements. It would have been better if it had been told from the point of view of the little girl, but shifting to the Rangers, and then Rita, and then Zordon… There are too many points of view. Corona’s art also feels misshapen, with the human faces almost as caricatures (particularly Rita, who looks like one of her monsters). The final page is supposed to be Zordon’s tube hanging over the Power Rangers’ rescue efforts as he talks about heroism, but it looks MUCH more like Zordon is some evil head in a tube glowering over the destruction of a city. This was supposed to be a story that wrapped up the annual with a sense of heroism and hope, but it doesn’t quite hit the right note.

Buy buy buy. At 7.99 it’s a bit steep, but that’s par for course for an annual, and the first few stories make it well worth the purchase.