Creators for Creators
A report by Sarah Miles

It is a well-known, well established fact that the comics industry is not easy to break in to. The Old Guard, the Boys Club, call it what you will, is you want to work for the Big Two (or anyone else for that matter!) you are going to have to know the right people, shake the right hands and – preferably  it seems – be middle aged, white and male.

Anyone can set themselves up with a blog or a webcomic, but given the numbers of these out there, there is little to no guarantee of notice, let alone success. You might get lucky as Rachel Stott did, and have someone from an established publisher see your work at a con and offer you a deal on the stop. But let’s face it, that is pretty unlikely.

Creators for Creators is a new initiative set up by a long list of well-established creators to help others get a break in the industry. So far they have only stated that you must be a cartoonist or artist/writer pair, and over 18 years of age. More details of submissions are due to be released next month, but the package on offer – $30,000 a year to spend it however you wish on your project  and the potential to publish with Image or Iron Circus if you so choose – seems pretty decent in itself, but when you add it the weight of the names who will be mentoring, guiding and generally supporting you, it becomes a much bigger deal:

DC recently announced it was launching new Talent Development Workshops,  but it has been reported that in order you be considered for a place you have to have a letter of recommendation from an existing “name” in the industry, and as this message from Gail Simone’s Facebook page shows, that won’t necessarily be easy: 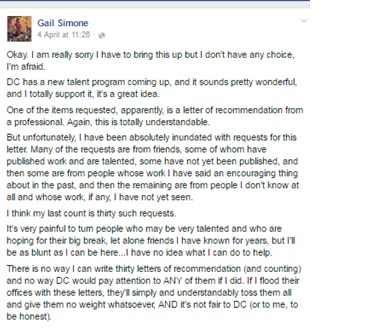 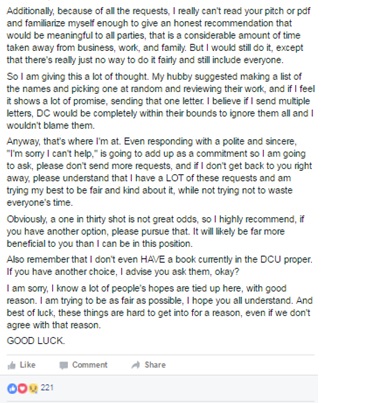 As someone who dreams of working in the comics industry one day, and has plenty of ideas for stories but no artistic talent or friends in the industry to bring those ideas to life, I am looking forward to seeing that the application process for Creators for Creators involves, and even more excited about seeing what new talent can spring from in.

Could this be a new way to break in to comics, defeat the old guard and show them who the new kids on the block are? I for one hope so, as the industry is moving in a positive direction with this step.