I hope that you don’t mind this being late. Aside from some outside forces that have kept me, or distracted me, from posting this, I wanted to make sure that I approached this post with a little more care. Wonder Woman is one of the most important comic book characters and one of the more essential fictional characters of the 20th century. She is an icon of strength and love and grace both in her origin and also in our reality, but that isn’t something I should talk about here. I need to talk about George Perez’s amazing run. Wonder Woman’s history as well as the many creators that have contributed to her mythos is something worth exploring, and I hope that you do exactly that. 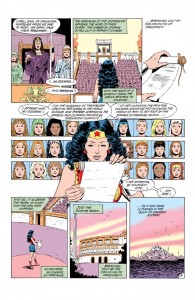 Positivity and optimism are two different things. A few weeks ago when we were covering Batgirl, I wrote about how I believed that the series was optimistic. While I think that some of that is true, especially when discussing Stephanie Brown’s character; I believe the series to be more or less positive. Wonder Woman by George Perez is an optimistic book. It exudes confidence and hope in the face of opposition, and therefore that optimism becomes inspiring.

It’s not one aspect that makes the book legendary. The reinvention of the character that Perez and his co-creators display is wonderful, as is the story, as is the message of selflessness, as is the amazing illustrations and layouts. These 25 issues are something truly marvelous to behold and needless to say, worthy of discussion on our show.

Let me begin with Perez’s art. When I first read the book in trade form, what blew me away was the level of detail that was present on every page. Comics simply are not made like this anymore. One issue of this would be four issues of a comic today; the amount of work is incredible. When I read the book for the show, I felt the heft of the omnibus was somewhat appropriate. The heavy book made me sit up and read, and frankly the art demands the physical attention. It alone makes the book incredible.

Then you get to the story. Perez presents Diana as a character totally void of selfishness. Every action the character performs seems to be 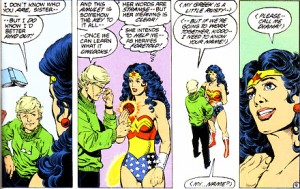 completely deliberate on behalf of the creators. It is a level of care that is only applied with devotion. When you read Wonder Woman, you are reading a comic by someone who loves their subject without hyperbole. Diana charges headfirst into danger when her friends are threatened without any thought of her own wellbeing. She is a protector without discrimination, and behind her is Perez masterfully directing the story. He doesn’t throw around words like ‘honor’ or ‘courage’ without demonstrating through his character their true meaning.

Such a well-developed character deserves an equally well-developed world to grow in, and that is exactly what is applied in this run. Wonder Woman is surrounded by locations both fantastical as well as relatable and characters that range from mythological to mortal. This is the series that makes the inclusion of immortals like Athena, Zeus, Ares and Hermes in the DC Universe logical, and also makes the character a believable bridge between the two.

I hope you can join us for what I’m sure will be a very long discussion on such a strong series.

You can listen to our previous episode on Fraction, Brubaker and Aja’s The Immortal Iron Fist here and also on iTunes. Also if you have any questions or comments, please reach out to us at: