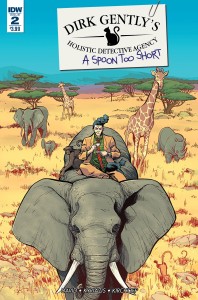 Douglas Adams’ poofy haired bloke in tweed returns for more interconnected adventures in Dirk Gently’s Holistic Detective Agency: A Spoon Too Short #2, and as surely as Sir Isaac Newton invented the cat flap, the legendary author would be proud to see his character continuing with such obvious aplomb. In the second issue of this story arc, the case of the Kingdom-Browns takes the holistic detective and client/assistant Tamasha to Northern Africa, where not only has an entire tribe lost their use of language, but poachers threaten extinction on the black rhino and the sound of an old blues standard fills the night-time air in the most bizarre combination of ideas encountered so far. Whatever they think of his methods, it seems Dirk Gently might be exactly the sort of detective Africa requires.

Writer Arvind Ethan David has been especially clever in his choice of subject matter for this follow up, taking a concern close to the heart of Douglas Adams and using it as a fundamental building block of the story. A famous example of an author who used his public image to support conservation efforts, the 1989 non-fiction book Last Chance to See saw Adams travelling the world to visit some of the rarest living animals surviving on the verge of extinction. The black rhino, while not featured itself within that book, has found itself facing a similar fate. Drawing that part of Douglas Adams’ life into Dirk Gently is satisfying to a fan such as myself of an author who never shied away from letting his personal interests wander into his work.

Sid the Rhino, the personification of this poaching dilemma, is one character within the comic I will admit to becoming personally and emotionally attached to within a remarkably short amount of time. Like the sperm whale or bowl of petunias in Adams’ Hitchhiker’s Guide to the Galaxy, an internal dialogue is used to give a true sense of character and personality to this animal within the few brief panels of screen-time he receives. It’s a cruel trick, but one that creates a lasting impression on the reader to bitter-sweet comedic effect.

The conservation conversation also gives the creators an opportunity for a detailed look into just how a holistic approach to detective work truly unfolds. One particularly wonderful section explains the concept of interconnectedness by laying together the factors that occurred in true reality to lead to poaching as an epidemic for Africa’s wildlife. Disconnected ideas such as middle-eastern terrorism, a booming Chinese economy, and the less-than-perfect scruples of western media come together not only to serve as exposition, but enact a demonstration that eases a potentially confused reader into understanding Dirk’s mode of thinking. Graphically selling this sequence with the use of puzzle pieces really drives the point home: just because you can’t put it together yourself, doesn’t mean the pieces don’t fit.

Kyriazis and Kirchoff continue to define the comedic aesthetics of the series with bright colours and pitch perfect facial expressions. The energy given to these characters is remarkable. Ideas are thrown around in conversation while Dirk leaps to conclusions in an almost literal way, and hos Lawrence of Arabia get-up is something which has to be seen to be understood. Now with the globe-trotting sensibilities of Tintin, the exotic backgrounds provide endless opportunity for Easter eggs hidden within the work that provided more than a few chuckles as I made my way through the pages of issue two. The L’il Dirk opener also pleasingly returns in this issue, a recurring feature that starts off each comic in a bit of fun that instantly sets Dirk’s adventures off with the more-than-appropriate tone of a Saturday morning cartoon.

VERDICT: Buy It. These creators continue to show respect and admiration for the legacy of Douglas Adams without wallowing in nostalgia. In A Spoon Too Short, the question being asked is not what has he written before, but what would he write next? I’m seeing concepts float together in a mix that I’m not sure combine in any reasonable way, and that gets me physically excited in knowing how brilliant the revelation of that connection could possibly be when we finally reach the conclusion of the arc. If this team is willing to commit to that idea-play without taking short cuts, it’s going to be a wild ride.

But I still won’t get over Sid.