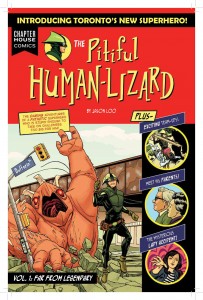 This. THIS is Toronto. The real, everyday, waiting too long for a streetcar Toronto. Board game bars, CP24, and meat lovers pizza. As Winston Zeddemore once said: I love this town! From the crooked floors of Honest Ed’s to the glorious fossils of the ROM, I’ve been living here for nearly a decade, and The Pitiful Human-Lizard is definitely a comic that gets the details right. As the comic unfolds, creator Jason Loo tells us the story of an underdog superhero who tries his hardest to stand up for the people of this great multicultural city even when he’s woefully outmatched. An optimistic story with real heart and self-deprecating humour, this is a comic not to be missed.

The comics in this collection follow the attempted superheroics of Lucas Barrett, AKA the second Human-Lizard. An evenings and weekends superhero, Lucas signs up for a medical study in the first issue that gives him powers of regeneration. Now the not-so-nimble fighter can have his teeth knocked out or even lose a limb and keep on fighting. Not that this helps out with his love life, office job, or any other part of the civilian life that makes this story work.

One of the best parts of Jason Loo’s comic series is just how quickly it sets up the lore of its universe and makes itself feel confident and fully realized. Populated with heroes and villains based around familiar fixtures to residents, the likes of Mother Wonder, The Majestic Rat, and Lady Accident soon join the Human-Lizard in Toronto’s version of The Avengers. References and allusions to other events in the city’s history makes this freshly created universe seem as lived in and worn around the edges as a hipster’s jacket. The fact that Lucas is the second Human-Lizard speaks volumes, and details like the portrait of the first Human-Lizard on the wall of Honest Ed’s show Loo has put thought into how a superhero legacy would be accurately reflected in his version of T-Dot’s past. 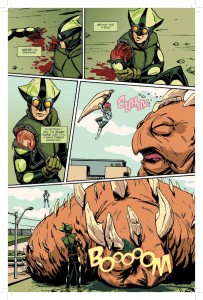 The real strength to The Pitiful Human-Lizard as a comic series lies in its sense of grounded humanity. Lucas doesn’t get his powers and just suddenly know how to fight and save the day. He’s putting himself out there even before he gets powers: trying to help, trying to fight for the good of a city he loves. It’s this sense of punching up that’s bonded to the Human-Lizard’s character that’s admirable. Wholeheartedly felt in the first issue when he spends the whole day wanting to go out on patrol after work and just can’t bring himself to justify the time at the end of the day, quietly ending his night by murmuring “you win, Wednesday”. And yes, he’s eventually fighting gigantic underground monsters in this comic, because that’s awesome, but he’s also checking up on his lackluster online dating profile, getting reports filed in for work, and making time to regularly go out for lunch with his parents. It’s a trait that kept me rooting for Lucas Barrett and kept me reading the whole volume in one marathon sitting to see where Lucas would push himself next.

It’s also a profoundly funny comic, in that sarcastic, self-deprecating way where Canadians practically hold a trademark. If being a superhero for the Human-Lizard means throwing his body at the villain until it’s subdued, he’ll do it. His plans to hide his “secret” identity fail almost immediately, leading to a terrific atmosphere of failure that’s ripe for comedy. Lucas himself is a witty and self-aware sort of guy, and seeing other characters such as Lady Accident develop into heroes in their own unique way is consistently enjoyable to read. 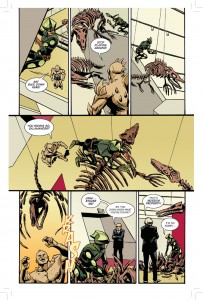 Jason Loo’s art throughout the comic captures locations perfectly. In a scene taking place at the ROM, I was amazed at the simple fact that he got the ticket counter, not to mention the plesiosaur exhibit, rendered accurately, and I was constantly interrupting my reading to point out locations I recognized to anybody walking into the same room as I was sitting (Hey look! Look! It’s Sneaky Dee’s! I’ve been there!). For anybody who knows Toronto, this is the selling point. Even for those who don’t, however, the spirit of classic superhero adventures is here in a city that stands up to the best in fiction. Nobody had to live in Metropolis to enjoy Superman, after all. The artstyle reminds me so much of classic comics that if you popped out the colours a bit (like the Gumzy mini-comic at the back of the book) you might see the similarities with Steve Ditko, but the colours stay just subdued enough and use the right amount of detail to keep the art style contemporary and modern. Combined with simple, atmospheric backgrounds and great use of body language to convey character, this comic looks as clean as our city’s streets. 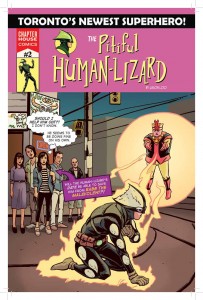 Special points as well to The Pitiful Human-Lizard’s costume design. The outfit that Lucas Barrett wears is wonderfully iconic and surprisingly unique. Unlike many “new” superheroes, I couldn’t place where it should have been from. It stood on its own and kept a place in my mind even after putting the book down for a few days. I for one would LOVE to see this costume cosplayed at conventions around the city.

The end of this collection also includes some of Loo’s Made In Chinatown mini-comics that were published in limited runs in between the main issues collected here in Volume 1. This work includes slice of life adventures from our heroes in short, comical stories which either stylistically or tonally wouldn’t work within the main run, but definitely add a bit more fun in at the end. One particular story involves a “not a team up” with Captain Canuk that’s sure to delight those fans of Canada’s national superhero. Even if you already own the main issues, the collection of these rare mini-comics makes this trade worth the double dip.

VERDICT:
Buy It! Maybe I’m biased because I live here, but The Pitiful Human-Lizard for me is a comic that delivers unique representation and a wicked dose of self-deprecating humour to a source of comic inspiration that didn’t make sense until I read it. Toronto is a city with an incredible background and colourful villains (Did I mention Rob Ford is an incompetent space demon?) and in using the city to its full potential, populating it with characters who reflect its diversity, and giving its protagonist a real human struggle, The Pitiful Human-Lizard possibly overtakes Scott Pilgrim as Toronto’s best representation in comics yet.