It’s been almost half a year since we in Brimperland have received anything more than a passing head nod toward plot development in an issue of Sex Criminals, and with today’s belated release of issue 14 (aside from a quick tease involving Kegelface and the psychologist who looks like Chip Zdarsky masturbatory daddy fantasy) the dry spell continues.

It’s time to have a come to peace moment with everyone’s favorite perpetually banned while simultaneously awarded comic. If you’ve stuck with Fraction and Zdarsky this long, you’re not really here for the plot. And if by some chance you’re really only picking up the issues each month (hah!) to find out if Suzie and Jon somehow figure out a way to rebuild Suzie’s library, then 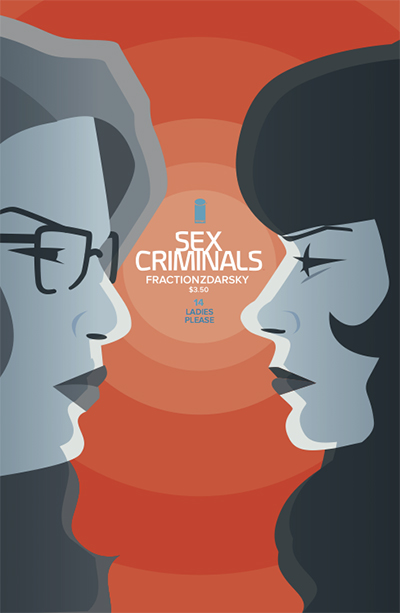 bless you you sweet summer child. Maybe we’ll get there someday, but I have a feeling that day will leave you feeling unsatisfied.

But really, it’s been a while since plot was the major driving force behind Sex Criminals. Really, after issue 5 wrapped up the first arc, Sex Criminals transformed. Just as they did away with the CMYK silhouette theme for their cover art, so too did they break free of the confines of standard structure and pacing. Issue six was, to use a too-on-the-nose analogy, the beginning of Sex Criminals puberty. It had been the star child and now was on it’s way to some interesting and perhaps awkward patches as it grew and developed into something more mature and complex. Over the subsequent eight issues leading up to this one, we’ve seen Sex Criminals begin to transform itself less into a vehicle built to deliver a touching and unique yet somehow consistently relatable plot laced with dick jokes only a perverted savant of the highest order could conceive into an almost Socratic form of open journaling in which Fraction, with the inseparable help of Zdarsky (for the two seem to work so well together it’s hard to determine where one’s influence ends and the other’s begins), eschews plot almost entirely in order to single handedly debate and discuss topics that are almost uncomfortably personal to him. This shift, I believe while maybe alienating to the more traditional comic reader, is what in time will really elevate Sex Criminals to a level of recognition and conversation that far surpasses the reaches attained by the majority of the medium heretofore.

In this latest installment, we see Fraction and Zdarsky delve into the meta. It’s hard to write about without giving anything away, since this scene takes up a decent chunk of the issue and any real reference to it is by it’s own self referential nature a spoiler. However, though this deviation feels almost like a literary manifestation of Coitus Interruptus, appearing out of nowhere just before the climax of the scene it references, it really exists as the continuance of the one-page, seemingly non-sequitur, moment in the previous issue. You know the one. Where Suzie and Jon sit in a cafe agonizing over what they should do. It’s the first overt insertion of Fraction and Zdarsky into their own work. What seemed nothing more than a masturbatory joke at time, now serves as a prelude to the longer conversation that takes place here.

Again, I’m sure this installment of Sex Criminals will be polarizing. More and more readers seem to be crying foul at the seeming lack of direction the comic seems to be heading in, and their voices most certainly wont be silenced this week. I, however, find myself more engrossed each issue. For someone who can’t get enough of comic creators insight into process, this book is a godsend. In it’s devolution into an almost Malkovitchian look inside the creators heads as they try to serve up a solid and honest piece of work, they deliver just that.

The verdict for this one is hard. I think if you’re sticking with Sex Criminals to find out what happens to Jon and Suzie and Robert Rainbow and Kegelface and her goons, then maybe you should start trade-waiting on this one. If however, you desire to be part of the new conversation that Fraction and Zdarsky are moderating with each subsequent release of their comic, then you’d be doing yourself a disservice not taking it all in as soon as you can. So in summary: Buy It?