Theatre is an art form that has been around for ages. Entertaining the masses has been something that people have been compelled to do in just about every civilization throughout time. Theatre is important for telling stories just for the fun of it and it’s important as a way to give the people a voice.

In addition to providing theatre-goers with quality stage productions, Antaeus also houses a Classics Library which features 6,500+ books. They provide arts education to “underserved and incarcerated youth and young adults” and more. 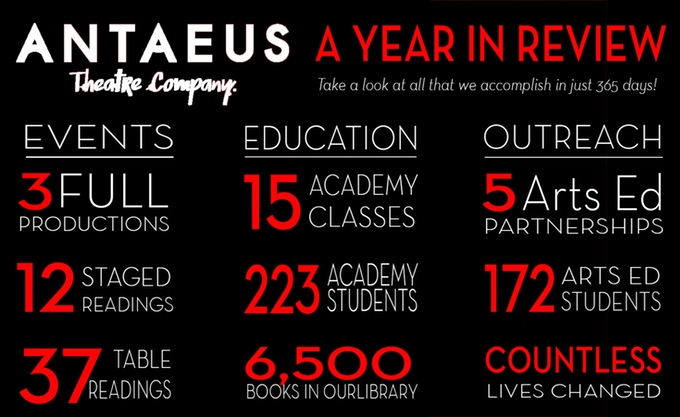 The group are now looking for a new home and trying to raise $75,000 via Kickstarter to make it all possible.

“In the Antaeus tradition, where classical meets contemporary, we’re using a crowdfunding platform to help raise money for our new home,” explain co-artistic directors Bill Brochtrup, John Sloan and Rob Nagle. “We hope it will help us engage the community and the world at-large, like the timeless plays we perform in our theater.”

The theatre is home to many actors and actresses that you’d likely recognize from a wide variety of your favourite geeky TV shows and movies. Names like Kurtwood Smith (Agent Carter, 24, That ’70s Show, Dead Poets Society), Armin Shimerman (Star Trek: Deep Space Nine, Buffy the Vampire Slayer), Linda Park (Star Trek: Enterprise), Rhonda Aldrich (Star Trek: The Next Generation), Harry Groener (Buffy the Vampire Slayer), Michael McShane (Wayward Pines, Spawn, A Bug’s Life) and SO MANY MORE. Seriously, check out their Kickstarter page to be overwhelmed with the names of awesome people you have definitely heard of before.

Even if you haven’t heard of any of these people though, know that the arts are incredibly important and that finding a home for all of that creative talent is a worthwhile cause.

“The generosity of the entire company has been astounding,” says Antaeus co-associate artistic director and Star Trek veteran Armin Shimerman. “We are blessed to have so many passionate people in our midst whose hearts are so devoted to the arts. Having emptied our pockets, we now look to a wider community to help build our new home.”

Tickets for their upcoming season, thank you videos, tote bags, books and even dinners with various members of the group are all potential rewards that you can get. Don’t wait too long though… some of the items up for grabs are limited and you wouldn’t want to miss out.

Don’t be a bolting-hutch of beastliness! Support the Antaeus Theatre Company and make sure to follow their #ShakespeareInsultChallenge throughout the duration of the campaign.