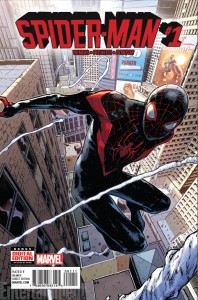 Now with 100% less adjectives in the title!

There were two events that reignited an interest in comics for me back in the summer of 2011: One was DC’s massive “New 52” initiative and the other was the debut of Marvel’s brand-new Ultimate Spider-Man, Miles Morales. I’ve always loved Spider-Man since I began reading comics almost two decades ago, but I didn’t always possess the passion to keep up with the webhead’s adventures. As a result of taking several extended breaks, the character’s mythology got too convoluted (was he ever married to Mary Jane?!), and I was left without a means of reading one of my favorite characters…that is, until Miles Morales came along. Now, Spider-Man #1 is here with the same creative team that captivated me five-years-ago, and it’s like reading that first issue of Ultimate Comics Spider-Man all over again. In fact, it’s almost too similar.

For brand-new readers, this means that Spider-Man #1 is a premiere jumping-on point. Yes, that’s right: this is a #1 issue that actually reads like a #1 issue should. Writer Brian Michael Bendis places Miles back in the midst of balancing his school life with his extracurricular super heroics. He’s no longer worried about the fate of his universe within the confines of some dumb pizza analogy; no, this Miles just wants to save people and hopefully get a girlfriend that can totally understand his web-swinging activities. Yet for those that have read Miles’ previous adventures, this setup almost feels like déjà vu, and the fact that Bendis doesn’t even address all the status quo changes is incredibly odd. Miles doesn’t seem upset over losing HIS ENTIRE UNIVERSE, nor is the fact that his mother is conspicuously alive ever addressed. Nothing. Not even an editor’s note. Considering this book had to be delayed in order for Secret Wars to conclude, it’s strange that it almost feels like that “universe changing” event never happened.

Be that as it may, our regular ‘ol Earth looks just as good as the Ultimate Universe did thanks to the return of artist Sara Pichelli to the series. Back when she was drawing Miles in Ultimate Comics Spider-Man, it was one of the highlights of the book each month and here, that’s once again the case. No matter if it’s the opening and closing scenes of a destroyed New York City landscape or the more tempered talky bits between Miles and his best friend, Ganke, Pichelli’s artwork is gorgeous. Of course, having Justin Ponsor returning with his bombastic color palette doesn’t hurt, nor does rich inks provided by Gaetano Carlucci. Those familiar with the lettering from the old Ultimate Comics run will find that Cory Petit’s letters are on point as well. In case it’s not obvious, this book has an amazing art team.

Buy, tentatively. For the curious reader that’s looking for a means to get in on the hype of Miles Morales, this is absolutely a must-read. But for those that followed Miles through his first series, into his second, and are now looking for his next adventure in his third, the issue doesn’t quite fire out of the gate. It’s good, but it’s good in the way the old Ultimate Comics Spider-Man was five-years-ago. Miles Morales has taken up the mantle as our earth’s Spider-Man. Give him something even better.