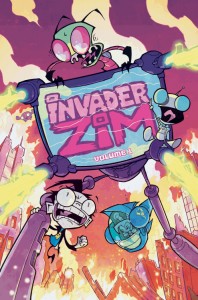 There are two types of people in the world: those that know/adore Invader Zim because they watched the short lived television show in the early 2000s and those that only recognize him because he graced every piece of clothing and most accessories that you saw on teenagers in the early 2000s. Of these two types of people, only one was excited for Zim’s return in comic book form, but this first trade release of Invader Zim comics #1-5, proves that all should be clamouring to get their hands on our miniature, but mighty, Irken overlord!

Chapters one and two show us that Zim has disappeared. There’s been no trace of him for what seems like years, but Dib (the world’s greatest paranormal investigator and Earth’s only hope against the alien menace, his words, no one else could be persuaded to say it) isn’t fooled. He’s been squirreled away, watching television feeds from his hidden cameras for any sign of Zim’s assured return… and he does! Dib is forced to act in the interest of all mankind! He’s gained a few pounds since beginning his surveillance though. A few stink lines too. He’s actually fused to his chair and unable to stand. Foolish human, that was Zim’s plan all along! No one stands in Zim’s way to claim an ultimate space weapon as his own. So begins an epic chase across the galaxy as the two battle each other in a bumbling fashion that’s just like old times!

The rest of the stories collected are one-shot stories centred around whatever ridiculous idea the writer was able to make work within the 32 page format of the comic. The last story in the collection, entitled ‘The Humble Bundle of Horrors’ was my favourite but all the narratives deserve respect. The four storylines shown in this trade are filled with the dark humour we’ve come to know and love from Jhonen Vasquez’s work but only the first storyline is written by the original creator. Everything else flows and feels like classic Zim which is just so important. The Invader Zim cartoon held a strange standard for its writing and it is strictly upheld in the comics, which is to say that everyone is still an idiot, zits and barf and disgusting food are still high up, and anything off-kilter is on-par.

All this zaniness is tied together with some beautiful artwork. The character models are still hella cute (especially the few times they stick out their little tongues) but they’re a little less sharp than they were in the show: they’re less digitally refined, more watercolour soft. It’s really quite charming. It’s also a colourful collection of comics, with purples, blues, and reds being the most prominent but, true to the cartoon, everything is just a little washed out, a little dingy. Appropriate for the near-dystopian world that Invader Zim has always presented.

The Verdict
Buy It! It drips with too much nostalgia for long-term fans to resist and it’s a good jumping in point for anyone looking to give Zim a try. The art retains the colourful charm that made the cartoon both cute and disgusting and the stories are as hilariously honed as the show was all those many years ago. Pick up this trade and prepare for doom!