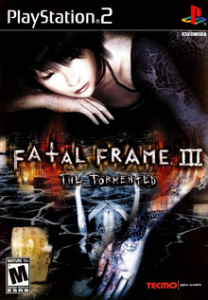 What is it about Fatal Frame 3: The Tormented that sets my teeth on edge? Is it the sprawling Manor of Sleep? Is it the ghouls that roam its hallways? Is it that this game pales in comparison to the two that have come before it? Is it that its tedium roars while its charms merely whisper?

When it comes to the last PS2 game in the Fatal Frame franchise there’s a lot of hype around it and I, personally, don’t think it lives up to any of it. If The Tormented happens to be your favourite in the franchise, you won’t like what I have to say about it. And no, I’m not just being an unnecessary curmudgeon about it because I love Crimson Butterfly so much! The game has flaws, but I’m getting ahead of myself. At least let me set it all up before I start tearing it down. I owe the game that much.

The Kuze Shrine was a matriarchal Manor tucked away in the foothills of a mountain forest. Only open during the snowy season it was home of a mysterious ritual. A young woman, known as the Tattoo Priestess, took the sorrows of those who visit the Kuze Shrine and had them inked upon herself. When her body was covered from head to foot in a tattoo of snakes and holly she detached herself from the world and was laid to sleep forever to keep the sorrows under control.

Reika was the last Tattoo Priestess at the Kuze Shrine. Like the two games that have come before, the ritual goes wrong. Reika witnesses something she shouldn’t and becomes unable to control the pain. The tattoos enter her eyes and the sorrows are projected unto the world. The Kuze Shrine was sealed off to prevent the real world from becoming engulfed in the sorrows but the manor began to appear in dreams, beckoning to those who had lost loved ones. Anyone who enters becomes cursed and slowly loses themselves to the Manor, never to be seen again.

Enter our three playable characters, none of which I enjoy! There’s the main character Rei, called to the Manor by her dead fiancé Yuu. You’ll play most of the game as her and, as far as I can tell, she possesses the most powerful version of the Camera Obscura. There isn’t really a single thing that sticks out about her other than she’s rigid as wood. I know that voice acting in the franchise has always been hit or miss. The first Fatal Frame fell a little short in terms of emoting a single thing, but Crimson Butterfly actually had some decent line reading. Mio’s grief and fear becomes your grief and fear. Rei’s grief and fear… is nonexistent. Besides a few times she’ll yell Yuu’s name, her emotions include gasping and speaking softly. Thrilling.

Then there’s Kei. He enters the story as Mio’s uncle. Mio has been cursed by the Manor and Kei is drawn there to try and save her. Don’t even get me started on this de-evolution in Mio’s character. Total baller in Crimson Butterfly to damsel in distress in The Tormented. Kei’s special ability is that he has more upper body strength than the girls. He moves, like, three things in the Manor that are blocking doors and that’s it. He’s the slowest, clunkiest character and, the cherry on top of his turd sundae, his camera is the weakest, forcing him to hide or run.

These are possibly cool mechanics–whole other games have been built around it–but I hate them with a passion here. Being helpless is a huge part of survival horror–I know that, you know, we all know it. One of my favourite survival horror games is an obscure little piece called Haunting Ground. In it you spend a huge portion of the game play hiding. How can I tolerate it in that game and not The Tormented? It’s done well in Haunting Ground. In Fatal Frame it feels tacked on without any great concern as it whether it adds anything. You hide and ghosts walk past you. You stop hiding to run past the ghost while its back is turned. If the ghost sees you, it chases you. For about half a second. Then you turn a corner and it leaves you alone. There’s no reason not to be seen because the ghosts just don’t care. So there’s half of Kei’s so-called special abilities rendered useless.

Having fun yet? If not there’s always Miku (yes, the same Miku from the first game). She’s living and working with Rei as a personal assistant and is drawn into the Manor by her brother Mafuyu. So what does Miku add to this shit show of a character collection? She offers the special ability of being able to crawl under the floor… oh goodie. There’s also a camera function she finds called ‘double’ that I’ve never been able to figure out. Maybe it’s useful but so far as I know the only thing it’s good for is making you miss shots because if you hold down the shutter button for a millisecond too long it tries to charge ‘double’ and the ghost you’re trying to fight gets you! SO MUCH RAGE OVER THIS AND ALL OF IT FROM CRAWLING WOMAN!

Okay, okay… calming breaths. Let’s talk about something this game did well. It is, of course, the story.

No doubt you saw this coming based on the two games that came before, but The Tormented has an amazing story. Unlike Himuro Mansion and The Lost Village, the Manor of Sleep isn’t a physical place that a person can get trapped in. They can only reach the Manor through their dreams after they’ve suffered a loss that they blame themselves for (aka survivor’s guilt). The deeper they willingly go into the Manor, the further the Tattoo Curse spreads across their body. The further the Tattoo Curse spreads across their body, the more haunted their life becomes as the nightmares in the Manor begin to seep into reality. There are occasions Rei will awaken from a dream right at the moment a ghost grabs her only to have that ghost follow her to the waking world. Or perhaps Rei is just hallucinating from lack of sleep? It’s a possibility. It’s never explained fully and that’s brilliant. Here are two different plains of reality and neither is safe.

Like any good haunted house, the Manor of Sleep offers more than its fair share of surprises. The best being that everyone will see it differently. The Manor draws its ghostly inspiration from the minds of the people currently wandering its halls. Miku finds her starting point in the Manor as Himuro Mansion, while Kei finds himself wandering through the familiar rooms found in The Lost Village. Definitely an interesting twist added to make going back to a single haunted house a little more appealing and original.

I wish they’d been able to do what they did with the Manor with their characters. Aside from Reika and the Handmaidens there’s not really a memorable ghost in the bunch. This totally sucks given the past games’ ghouls and the ample storyline to work with in this one. After all, these aren’t just people that wandered into a haunted house and died, these people are from all over, all gathered in the Dream Manor because of survivor’s guilt and all haunting for their own reasons. It all comes to naught though since the designs are bland, their attack patterns either too easy or too frustrating, and, most disappointing, you never really feel for them. Their back stories are underdeveloped and you won’t give a rat’s ass about any of them come the end of the game.

This is so exhaustive. I don’t have many nice things to say about The Tormented. But we all knew that: my cards were put on the table almost immediately. Thing is though, I hate having nothing really good to say about this game. I love the Fatal Frame series, I want to love The Tormented so badly as its own game and not just because it belongs to this franchise, but it just doesn’t work for me. The story is fantastic but the presentation is so lacking. Honestly, I think my biggest gripe with The Tormented is that it’s not Crimson Butterfly.

Petty and biased sounding I know, but look at it this way. Crimson Butterfly offered a huge upgrade from the first game: bigger location, more enemies, deeper mysteries to solve. Then The Tormented comes along and it doesn’t really offer anything new and exciting to top Crimson Butterfly like a good sequel should! The Camera Obscura has gone back to being charged based on time spent on the target and not proximity. They added a shit tonne of different camera functions but they’re hard to remember and tedious to upgrade. The legitimate tension that was built up through the cinematic cutscenes in Crimson Butterfly is replaced with jump scares. In general the cutscenes are few and far between with a lot of the story and dialogue between characters being dumped on you with Nintendo-esque text blocks. The Tormented just isn’t the upgrade that it was hyped to be. It’s a downgrade. A big one.

But where does The Tormented stand on the story-to-frustration scale? Looking at it from a technical standpoint, does it function as a game? Yeah, it’s a Fatal Frame game. You take pictures, you fight ghosts, you go on fetch quests in a haunted house: all the elements from the past two games are here, and yet it’s lacking. The pieces just don’t click together as nicely as they have in the past. I don’t know if it’s because of the characters or the camera or the jumping in and out of dreams, but it just doesn’t work for me.

Does that mean it won’t work for you? Hard to say. If both the first and second ones were a definite yes, this one is a hesitant yes. Play Fatal Frame 3: The Tormented but take it with a grain of salt, The Manor of Sleep might not offer you all you’re looking for. Perhaps Rougetsu Island will. Let’s hope for smooth sailing into the fourth installment of this ghastly, ghoulish game series. 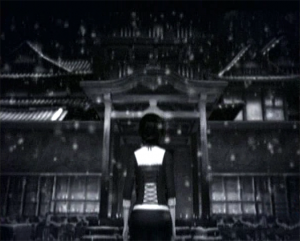