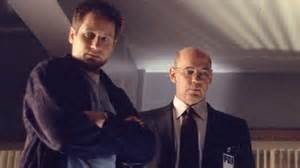 In lieu of a favorite X-Files episode, I decided to highlight a character for a few days to switch things up a bit. I will be posting each day until the X-Files returns for a six-episode event on January 24th. It will air on the Fox network.

Lt. Skinner is played by American Actor, Mitch Pileggi, and while he becomes a recurring and significant character over the course of the show, his first appearance is not until Season 1, Episode 21, entitled “Tooms.” Skinner supervises the X-Files office, and was initially somewhat inhospitable to Mulder due to his unorthodox beliefs.  He ultimately proves to be a loyal ally and advocate for Mulder and Scully, admittedly while trying to tow the line and deflect contention between the partners and the higher ups in the FBI. He’s one of those characters that has a quiet intensity, and though his efforts are often hindered, he goes to great lengths to protect Mulder and Scully from the mysterious government forces working against them.

Skinner: For every step you take they’re three steps ahead.
Mulder: What about you, where do you stand?
Skinner: I stand right on the line you keep crossing.

“When I started out, this was the room where they kept the copier.” (referring to Mulder’s office)

“Every minute of every day, we choose. Who we are. Who we forgive. Who we defend and protect. To choose a side or to walk the line. To play the middle. To straddle the fence between what is and what should be. This was the course I chose. Trying to find the delicate balance of interests that can never exist. Choosing by not choosing. Defending a center which cannot hold. So death chose for me.” Poor Skinner. The unwitting hero.

OMG Skinner is THE. MAN. Who knew?

Skinner knows how to play the game…