This review was written after watching the Japanese dubbed version. There are no comments on the quality of the English dubbing or translation.

The original Dragon Ball manga series ran from November of 1984 until May of 1995. It was adapted into several animated TV series and a plethora of animated movies. The animated series typically followed the main story told by Akira Toriyama (Dragon Ball’s creator) in the manga, but included filler episodes as well. The Dragon Ball Z television series was notorious for drawing out fights with long cuts of characters screaming as they powered up for battle. The tie-in movies were also original stories from the animation studios, and regarded by Toriyama as side-stories. The movies and the Dragon Ball GT television series are considered by many fans to be “non-canon” as they were not stories told by Toriyama.

This is what separates Battle of Gods, the previous film in the franchise, and Resurrection F from all of the other films. Both of these films featured stories and characters designed by Toriyama. These two movies are not side stories, but actual continuations of the series that ended nearly twenty years ago. Personally, I am happy these films are canon as it imposes limitations and sets up consequences that affect the wider Dragon Ball universe outside of the films. 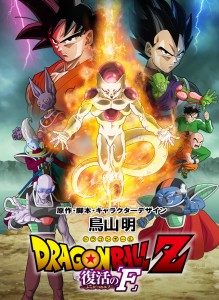 Battle of the Gods introduced the God of Destruction, Beerus, and his attendant and trainer, Whis. Their presence has had an impact on the world of Dragon Ball and its characters. In the opening scenes of Resurrection F we learn that Goku and Vegeta are training with Whis. It has been a long while since Goku and Vegeta have had an equal as a training partner or a master that is superior to them. The dynamic is reminiscent of the training and rivalry between Goku and Krillin way back in early issues of the manga. The training is a means to point out (via Whis’ commentary) the weaknesses that Goku and Vegeta have to overcome. This has a direct tie to how the battle and confrontation with Frieza ultimately plays out. It is a point that allows for internal character growth and development, which is something that the Dragon Ball franchise, especially in later years, lacked. Toriyama is not overhauling the characters in Resurrection F, but he is showing that his physically strongest characters still have a lot to learn, and that development can continue in further installments of the series.

Humor was an element that was very present early on in the franchise, but often missing in the later years. Battle of the Gods brought back much of that humor and tone, and even though Resurrection F brings back a villain that poses a more immediate and known threat than its predecessor, the film continues to keep the tone light with the charm and humor Toriyama is known for.

Some of that humor is attributed to newcomer Jaco, who made his debut last year in the prequel manga Jaco Galactic Patrolman. Jaco returns to Earth in Resurrection F to warn Bulma of Frieza’s impending arrival. He has some good one liners and his ground-based (he cannot fly) fighting style brings back more of that classic series nostalgia.

Jaco is not the only character we get to see battle it out in the film, and a number of characters return to defend the Earth from Frieza and the army of minions he brings with him. Krillin, Tien, Master Roshi, Piccolo, and Gohan are all present. The sheer number of invading troops means there are plenty of fights to be had. Resurrection F is not simply another “bad guys shows up and no one can do anything without Goku” type of story. Every single character that is present gets a moment to shine and be a badass. When was the last time we got to see Tien or Master Roshi tearing it up? The earthlings have long been left in the shadow of the saiyans, and I think Toriyama is acutely aware of this.

One trope that the television series is infamous for is the screaming and excessively long powering up before a fight. Thanks to an increase in power level, further training, and the run time of a motion picture powering up is kept brief through an almost Sailor Moon-esque style of transformation.

There are several other tropes found throughout the franchise that pop up in the film. In fact there are several instances that show just how aware Toriyama is of all these infamous tropes. I like a little bit of meta from time to time, and there is just enough to be humorous, but not enough to distract from the story.

There are throwbacks and references to the past, but the story itself is self-contained for the most part. The move is overall a thoroughly enjoyable experience for fans of Dragon Ball Z. The pacing is great for a Dragon Ball film, and pretty good for a film in general. There are enough fights and entertaining moments throughout the film to tide us over until the more action heavy latter half.

Resurrection F like its predecessor makes use of modern computer animation. I saw the film initially in IMAX 3-D and the depth of field added to many of the mid-air fights. It was a pretty awesome experience to feel like I was up in the sky watching these fights unfold before my eyes. Even upon watching it a second time in 2-D the fights were still impressive. Nothing about the animation felt flat, and that is definitely due to the various camera angles and use of computer animation.

The theme song of the movie is performed by Japanese girl group Momoiro Clover Z. It’s a J-pop song, and I am not overly fond of it. I feel that often times the end themes of anime movies or TV shows do not fit the themes or tone of said movie or show, and are used more for marketing promotion. Luckily it only plays during the end credits, so it did not interfere with my enjoyment of the film.

The music is not all bad though, and Japanese rock band Maximum The Hormones’s “F” is used as an insert song in the film. The band wrote the song about their favorite Dragon Ball villain several years ago. Toriyama heard the song, and liked it so much that he approached the band about using it in the film. I really, really dig this song. We even get some instrumental only of the song during the final battle. It just adds a lot energy to the scenes and encourages fist pumping.

Final Verdict: Dragon Ball Z Resurrection F is probably the best Dragon Ball Z movie to date. There is a good balance of humor and action, and it is not “The Goku Show.” It builds on the lore and allows for further stories to be told and developed. I also loved seeing some old favorites and Jaco getting in on the action.

The English dubbed version of Dragon Ball Z Resurrection F will be screened at theaters from August 4 until August 12, 2015 at select cities and theaters across the U.S. and Canada. Check dragonballz.com for more information.