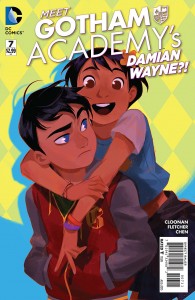 While the Convergence DC hiatus was a nice break from the New 52 DCYOU Universe, one of the titles I was most excited to get back to was Gotham Academy. Leaving off with a cliffhanger in which Damien Wayne, Bruce’s recently resurrected son, was enrolled at Gotham Academy. With Olive mysteriously away from campus, Maps finds a new partner-in-crime Damien. This isn’t really a start to a new arc as it is a fun one-shot but still, it’s a one-shot featuring MAPS so it’s gold nonetheless!

Continuing from where we left off in the last arc, Damien is at Gotham Academy and Maps thinks her new classmate would be a PERFECT addition to her Snakes and Spells team. Unfortunately the perfect team-up takes a magical turn and now it’s up to Damien and Maps to figure out how to stop the magical mix-up from taking over the school. Fletcher and Cloonan are on a roll with this series and having an entire one-shot adventure with fan-favourite Maps in the forefront is just what we needed after the two-month hiatus.

While most might interpret Maps’ attachment to Damien as a crush, Fletcher and Cloonan made it obvious that it’s as far from romance as possible. Maps is pretty removed from the usual “Scooby” gang and it’s nice to see that in the absence of the regular cast, the character can still have a great story. This is in large part because of the amazing dynamic Maps has with Damien. They’re in the same class, so it’s safe to assume that they are close in age but knowing where Damien comes from and who his father is, his dour and grim demeanour makes for an interesting contrast with Maps’ endless enthusiasm. It’s almost like Robin has his own Robin in a sense.

Guest artist, Mingjue Helen Chen is a fantastic fill-in artist for this series. Given her credits (Disney’s Paperman, Wreck-It Ralph), it’s not a surprise that the interior art provides a Disney feel to the story. There’s a softness to the art that really reminds me of a Disney movie and that made it all the more enjoyable for me to go along with the ride. Chen’s panel layouts also retain a familiar pattern, one that is entirely reminiscent to regular series artist Karl Kerschel’s style, and the familiarity helps to make it still feel like a Gotham Academy book.

Verdict: BUY. This issue was spectacular. The first arc of this series ended with Maps, Olive, and the others starting a detective club, and while this issue is reads as a one-shot, it still has that fun “Scooby” feel to it. The dynamic between Maps and Damien is major highlight and I hope that we’ll get to see more of it in the future. I’d also love it if Mingjue Helen Chen could come back and do all of this series’ oneshot stories (or even a whole arc!).