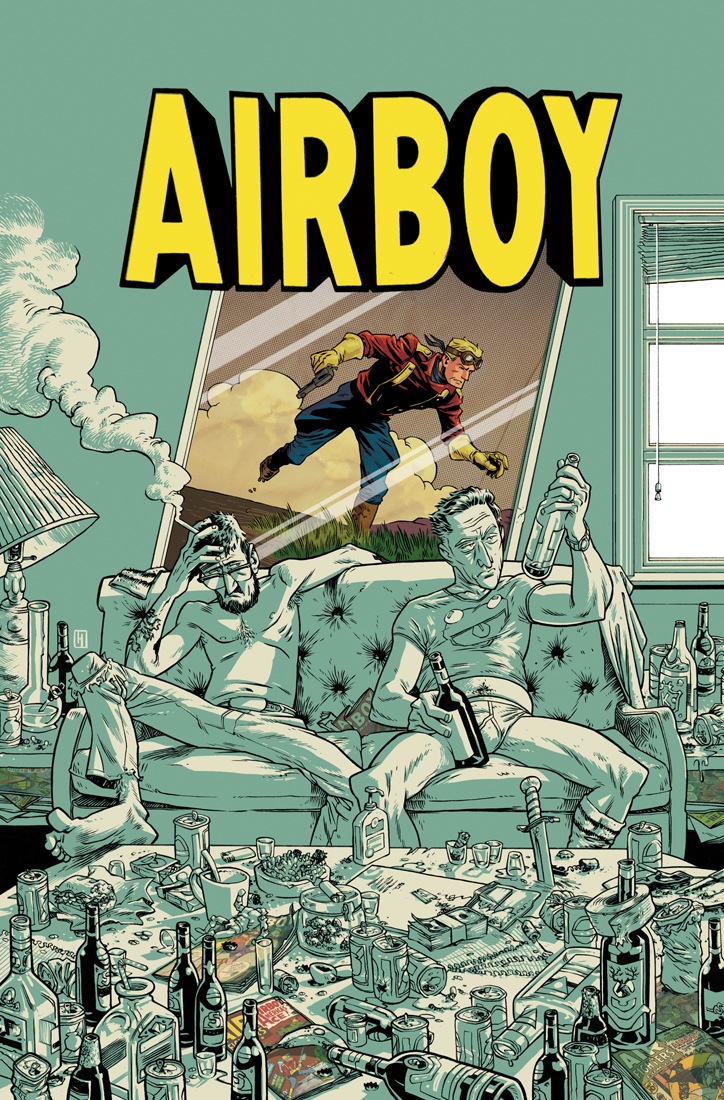 Airboy #1
Written by James Robinson
Art/Lettering by Greg Hinkle
Published by Image Comics, Inc.
Review by Logan Anthony Rowland
Who the Golden Age is Airboy?
Airboy has one of those strange names for me. A name I don’t remember, and yet, find extremely familiar.
Airboy.
Initially, when I agreed to review this book, I thought I knew what I was getting into. I love—LOVE—the Rocketeer, and I especially love what Mark Waid has done with the character in the past. So, when I saw Image Comics was releasing a new book about a Golden Age character, I leapt on the chance to review it. I didn’t read the solicits.
I was expecting something different, to be truthful. I was expecting, maybe, a modern approach to Airboy, or a fresh way of reading a Golden Age character.
Who is Airboy? Is he a discount Captain America? How is he relevant today? These were the questions I expected to be asking and getting answered.
Instead, I was left asking different questions:
Who the comic is James Robinson? Who the art is Greg Hinkle?
And honestly, I’m not sure.
The Story…
James Robinson and Greg Hinkle have come together to write a story about them coming together to write a story about Airboy. It’s like a fictional autobiography with some truth in it. There is just enough that seems fictional and just enough that seems truth, it almost makes you uncomfortable. The story opens with Robinson reluctantly accepting the direction to create an Airboy comic and after finding an artist, the two of them go out on a wild night of “drink, drugs, and indiscriminate consensual sex,” as Robinson put at the Image Expo 2014, speaking of it all as one of the central themes of the story. It’s a vulgar touch, but there is promise of tenderness with what is to come from the final page. Yeah, I’m excited about it.
How the story succeeds…
The story succeeds, because, for whatever reason, you like the main characters, you like the fictional manifestations of James Robinson and Greg Hinkle. Even while you watch them essentially live out the actions of a Hangover movie, you like them. They’re written well and their dialogue is funny and genuine. The art is truly stunning, with the monochromatic coloring adding just the right amount of grime. The direction of the art is full of direction and motion, with some panels seeming as if they belong in Harry Potter’s universe because you forget the pictures aren’t actually moving. The art, the story makes you laugh, it makes you uncomfortable, it somehow talks you into keeping reading.
How the story fails…
The idea of a fictionalized autobiographical way of writing can easily stumble into the realm of cliché and be a bit on the nose. This story, especially in the beginning, does struggle with being a little too much on the nose. It’s always difficult for me when I know a writer is making a joke about something and the opening has a few of these moments.
Warning…
This book is very—VERY—mature, both in themes and visually. I’m hoping that no one who remembers Airboy saw this in a comic shop and bought it for their child. Luckily, the cover gives hint of what’s inside.
The Verdict…
James Robinson and Greg Hinkle’s Airboy is shocking. It’s entertaining, it’s mysterious and I think, for now, it’s a book worth reading. It isn’t the Airboy I was expecting—it isn’t the Airboy I’m sure fans of yesteryear were expecting, but it is something completely unexpected and fresh, and that alone, should be enough to get you to read it.