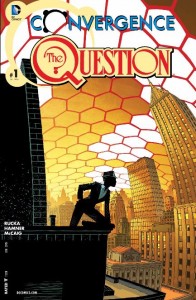 I didn’t know much of what Convergence was going to be about. Another alternate-universe stirring and shaking and smushing event that would sort things out — I’ve had a good history with those at DC! I don’t need my alternate universes to be simplified, but the shadow play is fun. And I know that nothing is forever, anyway. The next editorial team for DC is out there somewhere and on the rise. You think they’re going to be bound by the what the old folk of 2015 had to say?

Then I read Joey Braccino’s excellent review of Convergence #1 and I thought, “Oof, that hurt. But at least I’ll get to see characters I like populating books with good creative teams!” And that is true. Captain Marvel. The Speed Force. Lois Lane’s unborn child. The Question.

The writing and the art are both, as I say, quite good. This can be seen especially in their writing of Two-face … a character who I thought had had all of the schtick drained from him long ago (although he has also been great in Batman ’66). In tandem with the jagged colors of McGaig, they create a quasi-post-apocalyptic atmosphere that almost lets you forgive the hex-grid in the sky and the ersatz Secret Wars plot underlying it all.

The writing is good. The art is good. What’s the problem. It is the Question. She’s boring. It could be because of the Convergence frame. The story begins inside pre-Nu52 Gotham, which has been plucked from the face of one Earth or another, and enclosed in a dome. The characters have been trapped their for a year. The citizens of Gotham have that dark future ennui. Like rats in a trap, they are starting to feed on each other.

And yet within this, the Question is boring.

Yeah, I love the Question. Or is it the Question? I love Greg Rucka. And I don’t know Cully Hamner well enough to express affection, but the art in this book is pretty dang good. Could Rucka and Hamner get together on a Two-face series? That I would buy. I’m not going to buy Convergence: The Question #2.

The mantle of the Question was taken on by Renee Montoya and inserted into the Bat-verse. There was a bit more of the brooding grimness going on than I might like, but she brought the crazy and was never boring. The Question we see in Convergence lacks the crackle of those previous outings. She’s been reduced to a mopey noir detective with a quick mouth, a drab home life, and a not very good two-issue mini-series going.

Skip it. Even the benefits of Convergence — seeing beloved characters treated well — are not yet coming to fruition. If there’s a great Convergence book out there, I want to know (please Captain Marvel!). This one was disappointing.