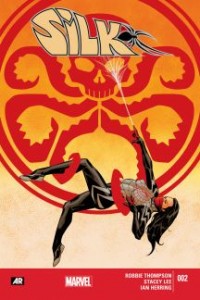 “Okay. Really starting to get the hang of this. Crazy stuff happens. I punch it. Easy. Good times.”

Out of all the Spider-related superheroine comics out right now, Silk is the one that I’ve been the most excited to read and I’m happy to say that the short wait was more than worth it. Robbie Thompson and Stacey Lee have once again delivered a great issue with exceptional writing, pacing, and art, and this book is quickly reaching the top of my pull list because of their amazing work. Cindy Moon is an incredibly multi-faceted and realized character and in just two issues, I’m almost as enamoured with her as I was with Kamala Khan when she first debuted.

Cindy’s journey here continues as she desperately searches for any trace of her family with no luck at every turn. While the debut issue featured several familiar Spidey characters, including Peter Parker himself, this one is even more centered on our title character. This is Silk’s book and no cameos are needed for it to be a strong superhero title. Her driving force and motivations are really at the forefront in both issues but it’s brilliantly told in different ways. In the first issue we felt Cindy’s pain through her flashbacks to her time with her family. For me, there was a sense of familiarity with a lot of the dynamics there. This issue however, doesn’t feature any flashbacks to her family and we get to feel Cindy’s feelings of absence and emptiness through this arguably conscious choice.

To offset the powerlessness she feels when it comes to searching for her family, Cindy tries to better herself as a crime fighter and so far it seems to be working for her, at least that’s what she thinks. Maybe it’s a higher purpose. Maybe it’s just a distraction. Maybe it’s a punching bag therapy session. Regardless, the pieces of Cindy’s shattered life don’t just stop moving because she’s a superhero. But unlike other heroes, she doesn’t seem to be suffering from balancing her day job with her crime-fighting gig. She’s doing great as Silk and it’s helping her succeed as an intern reporter. Still, Cindy’s has to deal with the pieces of her life she can’t get back and that’s heartbreaking. The looming threat coming from the shadowed figures creepily watching her in the bunker certainly don’t help. Still, Cindy is far from helpless and proves that when she battled the giant Hydra robot. It’s a great action sequence and one that actually reminds me of a lot of self-defence tactics for women.

Of course, the action sequences would be nothing without Stacey Lee’s incredible art. The interiors continue to wow me with each panel from the high-octane action and dynamic lines to the emotional flashbacks. Cindy looks fantastic and sassy in her civilian clothes when she’s at the office. As Silk, she’s kicking butt but thanks to Lee’s art, her eyes can emote everything she’s feeling (including general attitude and sassiness).

There are moments when the panels aren’t quite framed with just a traditional white border. In one page, she’s attacked by a giant robot head with tentacles (it’s not as squeaky as it sounds) and the tentacles that are wrapped around her also act as a weird frame for the top of the panel. One of my favourite parts of this issue is seeing the spread pages that have several panels hung up as if they were pictures on her web-board in her bunker. Ian Herring’s colours are a perfect match for Lee’s art as it adds to the clean lines and roughs up the rougher dynamic action scenes when needed as well. The colours used for some of her flashbacks are incredibly effecting and speak to the emptiness she feels as she walks down memory lane.

I hesitate to say that I “pull the diversity card” often because that has a such negative connotation. I love pointing out diversity because it’s really hard to explain to some people what it means to FINALLY see themselves reflected in primary protagonists in fiction after having little to no representation for so long. Silk is a character who’s incredibly lost. She’s independent, lonely, smart, resourceful, strong, and sassy. She’s a multitude of traits and that includes being Asian-American. She’s not a stereotype in any way. It’s not something that’s directly referenced but noted through details in the art in the first issue. Yes, it’s important to have cultural aspects involved but that doesn’t have to be the case every time. Asian-Americans in particular can be involved in their family’s culture and history or they can be third or fourth generation and know nothing about their ancestors’ cultural history.

It’s important to see Cindy as more than a sidekick, or a love interest, or a plot device. It’s important to see her move beyond the stereotypes of martial arts expert or sexy ninja or computer/math wiz. What’s most important here is SEEING her here as the central character of her own book. Seeing her as a visible Asian-American female character without it being ALL about her being Asian.

Verdict: This is definitely a BUY. This book is just as important as Ms. Marvel for young girls and women looking to see a reflection of themselves in this medium. The first issue was really, really strong but here we see Cindy completely on her own without Peter, without his villains, without his cosmic multi-verse involving drama, and she’s doing just fine. She may be lost and out of time but she’s still moving, she’s still fighting. This series is a must-have in my opinion and while second issues can be just as troubling as first issues, this one can act as both. It’s a strong standalone issue, a great jumping on point if you don’t feel like back-tracking, and it hints at some pretty dramatic things that will happen in future issues.