The Gender Politics of Saga

Describing the story of Brian K. Vaughan’s Saga is not an easy task. On one hands it’s a sci-fi epic about a war between rival species, one inhabiting a planet called Landfall, the other on the planet’s moon, Wreath. On the other it’s a story of family, of motherhood. It’s a story of forging one’s own identity, or maintaining one, while your entire race is at war. There are also royalty who have TVs for heads, assassins, a cat that can tell if you’re lying, flying space trees, ghost babysitters, and so much more. While this all sounds bizarre, and it is, it is also one of the most lauded, awarded, and talked about series in the medium, and for a good reason.

With a complex plot ranging a myriad of subjects, one of the most intriguing is the way it handles the politics of gender. At the center of the story is Landfallian Alana, and her husband from Wreath, Marko. It’s an age-old story, the two fall in love under dire circumstances and their love has to stay a secret. Well, Alana ends up pregnant and the two have to flee with their child, Hazel, who is forbidden to exist. Both Alana and Marko were soldiers on opposing sides of the war, but Marko has become a pacifist swearing off violence, leaving Alana to do a lot of the fighting and Marko taking care of baby Hazel. That isn’t to say that Marko doesn’t ever bear arms, because when his family is in danger he does, it also isn’t to say that Alana doesn’t mother her child, because she does. That’s what is so interesting about the relationship, it is incredibly egalitarian without a single stereotyped gender role falling squarely on one or the other. This subversion continues when Alana eventually gets a job on a planet that they are hiding out on. During this arc Alana is the breadwinner, leaving Marko at home to take care of Hazel. This eventually becomes a point of contention between the couple, but not because of the roles each of them have, but because of events such as drugs and cheating that come along with working long hour and being home alone most of the day. 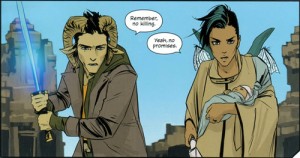 While Alana and Marko’s relationship seems functional and egalitarian, Marko’s parents appear to have a mostly reversal of typical gender role type relationship. His father Barr is soft-spoken, gentle, and kind. While his mother, Klara, is abrasive, headstrong, and a warrior. When they meet up with Marko and Alana it is Klara, not her husband who goes after their son when he’s in peril. We see these roles continue to show a stereotype reversal in their ordinary activities. Barr shows proclivity towards sewing, and makes the whole group new clothes. Once while the group had been safely hidden on a planet for a period of time, before Alana get her job, Klara tells her “you’ve been delighted in playing domestic goddess, but a new mother’s place is in the workforce, where she can provide for her people.” Showing her possible ideas of matriarchy and that to her the male was not inherently the head of the household.

One of the many characters that are on the hunt to kill or abduct Marko, Alana, and Hazel is a freelance assassin called The Will. He does not have the slightest qualm with killing his targets, and when he came across a small 8-year-old girl who had been sold in sex slavery, he used these talents to free her and take her with him, even though it in no way benefited the cool and calculating mercenary. Their relationship is different than the previous two because it is between a child and an adult. The Will takes on a very maternal role with her. He is the one taking care of her, providing for her, and ensuring her safety as they gallivant through space. It is really interesting to see the dynamics of the ruthless killer and an innocent young girl who have no ties by blood, but care about each other greatly. This is one of the many types of relationships that writer Brian K. Vaughan interjects into the series to subvert what we think of as normal.

On the opposite end of this spectrum are Prince Robot IV and his wife, the aptly named Princess Robot. They appear to be an amalgamation of various versions of our monarchial societies, they even say, “mum” as the British would. The royal family is the pinnacle of society within the Robot Kingdom, whom outsource their military and supports the Landfallian army. The behavior between the two members of the royal family are exactly what you would expect from an overtly stereotypical representation of a marriage between autocrats. Prince Robot is the one being groomed to take over for his father one day, the one expected to act with the epitome of honor, the warrior, and the caretaker of his wife. Princess Robot follows along with these tropes, she stays at home while her husband is off taking care of things around the Kingdom. We find out that she has also fulfilled her assumed womanly role around issue #12 when it is announced that she is pregnant. While it is never explicitly stated how they get their names, which include a title, it is implied there are possible incestuous relationships that go on within the society.

The interesting thing about what Brian K. Vaughan does with the Robots is showing that they are this ridiculous and stark contrast to the rest of the cast of characters who have a much more nuanced and progressive relationships. They act as a foil of sorts to the way that Barr and Klara, Alana and Marko, and The Will and Sophie interact and have agency within and outside of their relationships with each other. Vaughan’s use of subverted stereotypical relationships are just one of the many things that have made this series one of the most read and lauded of modern comics.