Lady Killer is about a woman who lives two lives — one as your average 1950s homemaker — and the other as a hired assassin! 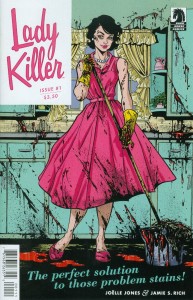 Lady Killer #1 is gorgeously illustrated by Joelle Jones (House of Night, Helheim). The best way I can describe her style is sexy-Disney. The story, by Jones and Jamie S. Rich (Madame Frankenstein, Grendel Tales), is fresh, violent, and fun. The colors by Laura Allred keep the tone of the book serious yet light by combining the lime-greens, flamingo-pinks, and French blues of the 1950’s with somber and moody shades and tones. The colors give the subtle impression of a layered world — darkness with a light coat of pretty paint.

Since this is only the first issue, the motivations, conflicts, and quirks of the characters are not fully revealed. What can be gathered though is that this assassin named Josie (if that is her real name…) is confident, capable, and not afraid to get her hands dirty (either from killing people or cleaning house). Gene, Josie’s husband, seems kind, complacent, and caring. His mother, who either lives with them or is visiting, is ornery and nosy. Peck, the only other character living outside of normal society inside the assassin’s world, seems privileged, tactless, and a bit juvenile. Together, this cast of characters sets the frame work for the first story arch, which is sure to develop both of Josie’s lives, personal and professional.

Lady Killer #1 Recap: In the first half of the comic, Josie is on an assassination mission. Posing as an Avon cosmetics sales woman, she enters the house of her mark, Doris Roman. Josie shows off this season’s line of spring cosmetics to an uninterested Doris. When Josie’s first covert-attempt to kill Doris fails, she decides to cut to the chase and get hands-on with the situation, ending Doris’s life brutally, and bloodily.

The second half of Lady Killer #1 display’s Josie’s life at home with her husband, young daughters, Great Dane, and mother-in-law. Everything appears normal at first. Josie pan-fries pork chops in the kitchen, the kids play dress-up, the husband comes home from work, and the mother-in-law nags. Soon though, Josie is contacted by Peck, a Cary Grant/Timothy Dalton looking character who wants to hire Josie for another job…one that her male counterparts lack certain womanly assets for. She is to play the role of cocktail waitress at the “pervert bar” the Kitty Cat Club as she maneuvers her way to a club VIP, who is marked for death!

Buy it! Dark Horse gives us a fun yet disturbing look into the life of an assassin/homemaker in 1950s America. Lady Killer #1 is 22-pages packed with great stories and characters, beautiful illustrations, and amazing colors.