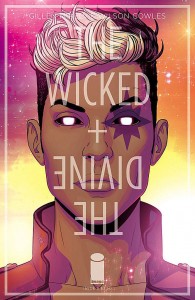 This character appears in this book.

The Wicked + The Divine. Second Arc.

The Pantheon sold her out.

Laura’s got an undercut and her snapping magic that she thought she had doesn’t seem to want to klik anymore.

And he knows who killed Luci.

And the mystery thickens.

But it goes on, man.

So “FANDEMONIUM,” the second arc of Kieron Gillen and Jamie McKelvie’s wicked cool, divinely illustrated, critically acclaimed graphic art sensation, kicks off this week with The Wicked + The Divine #6. Gillen and McKelvie hit us with the harsh (?) reality of celebrity and legacy and godhood in the opening pages, when our protagonist Laura runs into two fans sporting newly minted “Lucifer Died For Our Sins” t-shirts. Classic mass market media merchandising, amiright? Laura vomits and life goes on.

We see the talking heads try to make sense of Luci’s death/sacrifice/murder/etc. We see Laura struggle to communicate with her parents about what happened. And we get just a bit more background on the whole “Why is Laura so angsty about this whole generational conflict thing?” and “How do these teenagers become gods in the first place?” The script is sharp. It’s witty. It’s got a thematic intention that is clear and effective and relevant; Gillen is addressing issues of fame, yes, but also the ongoing conversation about the worthiness of any generation’s art/music/problems/life/etc. in comparison to the last. There is a spectacular sequence mid-book when Laura (in flashback) confronts an ornery old timer about the whole “culture is dead; do these kids deserve a pantheon; these “lazy and entitled” millenials; blah blah blah.” She’s totally bad@$$ and strong and awesome.

McKelvie and Wilson are masters of their craft. Period. Not much else to say here regarding the sheer exquisiteness and synergy of the artwork. Gorgeous realism mixed with pop glamour and vibrancy. Energetic. Youthful. Wonderful.

Buy. Jump on. Check it. Get on it. Purchase now. Pass it around. Make it so.

Kieron Gillen and Jamie McKelvie are telling the hippest story in comics right now. This is your chance. F##k it.