Back Matter by Zack Davisson

My attention was first brought to Wayward through Twitter. I do not remember the details, but there was some talk about ghost and Japan, and I received a tweet from one of the people involved in the series. It caught my eye, and I like Jim Zub, so I decided to give it a try. I was blown away by the first issue, and continued to be blown away in issue #2. 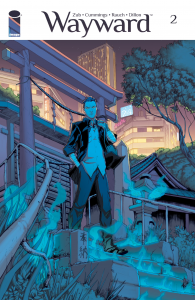 Zub is a fantastic writer, and I normally make the story and writing the main focus in my reviews, but the big star on the creative team is Steve Cummings. This art is absolutely stunning. It is beautiful, and grounds the story in the real world. So often in western comics Japan (Tokyo in particular) is depicted as some sort of futuristic city bathed in neon lights. There are certainly some parts of Tokyo that reflect this, but on the whole it is a rather inaccurate depiction of Japan. If you pick up a slice of life manga drawn by a Japanese artist, you will see that it does not look like the warped western view.

Cummings is an expat living in Tokyo and he gets what the city looks like. I recognized locations and even have a pretty solid idea on the area and neighborhood lead character Rori and her mother live. This detail from Cummings is incredibly important to the story because is firmly roots everything to a real place and the real world. Weird creatures and spirits are at the center of the story, and because the scenery looks and feels like a real place we can trick ourselves into thinking and believing the story is real. If the locales were something created solely out of the mind of an artist that had never experienced life in Japan, then it would be easy to dismiss everything as pure fantasy. You lose that immersion factor. For me Cummings’ art is what pulls me into the story and keeps me firmly rooted in place.

Cummings is not the only one pulling us in. Jim Zub does a great job of that through Rori. Since she is half Japanese she has a foot into the strange world of Japanese culture and custom, but she is also half gaijin(foreigner or outsider). As an outsider she is a character that we as the reader can relate to and see not just the strange creatures and spirits, but Japanese culture.

All of what I mentioned is what impressed me so much about Wayward #1, and what continued to impress me throughout the second issue. In the second issue Zub shows us a lot more about Rori and the kind of person she is. We get a rather shocking look at how she is dealing with her parents’ divorce,  her move to Japan, and adjustment to her new life. The whacky spirits and stuff are pretty much second fiddle in the issue compared to the exploration of Rori’s character.

However, we are still given a look into this world of spirits and Japanese mythology. The mysterious Ayane appears to be missing from the issue, but Rori is introduced to a new ally in the issue. Her encounter with this person provides much of the action of the issue and gives us more of a look into the powers Rori is manifesting. It has me wondering what exactly can she do and what are her limits with these new powers?

Lastly, the essays from Zack Davisson in the back of the issues will help many readers to understand different aspects of Japanese culture.

Wayward is a solid new title that is worth your money. It offers so much more that many four dollar books on the shelf, and it is only three bucks! (Digitally: $2.99; Print: $3.50) Steve Cummings amazing art will draw you in to a real Tokyo. If you’ve always wanted to travel to Japan and cannot afford the expensive airfare, then you are in luck. Wayward will take you to Japan and give you an added story about some of its traditional ghosts and spirits (You can’t even get that in actual Japan).