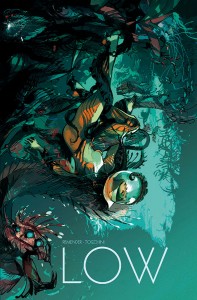 Low by Rick Remender and Greg Tocchini is a slow burning narrative, sluggishly moving forward just as the sun is leisurely burning up the atmosphere of the earth.

One thing my mother has always been is annoyingly optimistic and near-tragically hopeful. She always knew my problems were going to work out, even though there was no tangible proof. As I flip through the pages of Low, I can’t help but think of my mother and her maddening optimism.

And that makes me smile, and maybe tear up a little, if I’m honest.

Following that, I will probably blush and that isn’t because I’m embarrassed but because my mother would not approve of the graphic content of this book.

The narrative burns as slowly as the sun is burning our very own atmosphere and that infuriating fact has lead most of the people on Earth to give up on hope and just like the strong mother she is, Stel Caine is quite possibly the last person with hope in the world. Even though events from the first issue and even the second have shaken her hope, Mrs. Caine still remains resolute in her resolve to faith.

Remender and Tocchini work excellently well together to craft a visually arresting narrative as well as present a gargantuan world and plot with haunting and poignant prose. Seriously, the art in this book is near worth the price of admission alone. The art and storytelling present themselves in a cocktail mix of epic proportions and campy cartoonish pleasure.

Any negative problems with the issue reside in it’s lackluster issue to issue format, as it will probably read better as a trade.

The book features a strong and yet brilliantly delicate female lead that rivals the best. The story being from the perspective of a mother is an absolute delight.

You should most definitely buy this book, whether it be now or later in trade, it is well worth the read, especially for those of you who were mama’s boys and mama’s girls growing up. Remender is killing it with his creator owned with this and Black Science taking up residence in my wallet. It’s slow, it’s haunting, it’s a wonderful read from a mother’s perspective.

Parental guidance: This story is for mature readers only, contains many graphic images of violence and sex, and has language that may not be appropriate for young readers.