I took a break from Daredevil for two months during the Original Sin event but jumped back on board with issue #8. And you know what? It’s good to be back (Daredevil is a book I sometimes take for granted. Sorry!). Mark Waid, Chris Samnee, Matthew Wilson, Joe Caramagna, and the rest of the team consistently create fun, down-to-earth, thrilling superhero stories month after month (and on schedule too!). Daredevil #8 is a great example of their combined talents and is also a great jumping on issue for new readers. 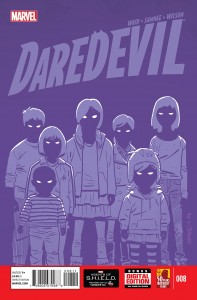 Daredevil #8 is a quick, easy read, that accomplishes a lot. A new story arc begins — one that casts a threatening (purple) shadow over San Francisco. A new subplot starts that will potential play off of one of Matt Murdock’s character flaws, and Kirsten McDuffie, Matt’s friend and current business partner, reconnects with a family member. Several story seeds are planted in this issue.

The part of the comic that stayed with me the most after reading Daredevil #8 was the breathtaking colors by Matthew Wilson. From the monochrome cover to the last page, Matthew Wilson’s colors make Daredevil’s world come alive. I know that’s a corny cliche, but there’s something about the coloring of the book that adds an extra layer, or dimension, to the book. Wilson’s colors pour the story into your eyes. I can’t think of a better way to describe it. Color is also a theme in this issue (there are some blatant examples and one or two more subtle references).

BUY IT! The writing – great. The line art – beautiful. The lettering – superb. The color art – BREATHTAKING!