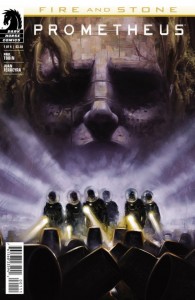 Prometheus: Fire and Stone #1 has a big job to accomplish. It needs to appeal to hardcore Alien/Prometheus fans, casual fans, and complete newbies to the Alien universe/mythology. It also needs to be, of course, an awesome comic that will bring you back for more. How well does the creative team of Paul Tobin (writer), Juan Ferreyra (artist), and Nate Piekos (letters) accomplish these goals?

Before I move onto the review, there are a few things to keep in mind about Prometheus: Fire and Stone #1

So now that we know where and when Prometheus: Fire and Stone #1 takes place, let’s move on to the review.

Prometheus: Fire and Stone #1, coming in at 25 pages, covers a lot of ground very quickly. After a two page prelude of sorts, we get a several pages of character introductions, and similar to other Alien stories, there are quite a few characters. It’s difficult to introduce comic book readers to a whole slew of new characters in one comic book. In movies, actors can use their body and voices in fluid ways that help define their characters and make them stand out. In a comic book, it’s all up to the dialogue of the writer and the skills and style of the artist. Out of the dozen or so characters introduced in Prometheus: Fire and Stone #1, I remember maybe two with any clarity. I give the creative team props though, for coming up with a clever, yet simple, way to introduce everyone and show a bit of all of their personalities. I look forward to these characters’ development in upcoming issues.

After the characters are introduced, the story shifts from being aboard their ships to the surface of their destination, LV-223. Once on the barren desert moon, they discover it isn’t so barren or desert after all. They find strange and unexpected life forms (such as monkey with an odd exoskeleton…hmm) and even puddles of oil-like black ooze! As their exploration continues, things get even weirder for our characters. They make a discover that puts into question where they’ve even landed! The issue wraps up with a great teaser for the next issue (all I’ll say is, “don’t open that door!”).

The character dialogue feels mostly natural. There is some stiffness, and some of the dialogue does seem forced, but I attribute that to this being a first issue with a huge, brand new cast. Overall, the writing is excellent and accomplishes what is should: it sets the stage for an exciting adventure, filled with human drama and the familiar themes of the Alien/Prometheus universe (e.g. life/creation, death/destruction, struggle/futility of survival, etc.).

Paul Tobin’s writing style flows well with Juan Ferreryra’s art, but the amount of dialogue crowds many of the panels. Perhaps they’re intentionally trying to induce claustrophobia in the reader, which is, after all, an element of the horror of the Alien franchise.

Juan Ferreyra uses a beautiful, clean, accessible style that successfully replicates the tone and texture of Ridley Scott, Jon Spaihts, Damon Lindelof’s Prometheus movie, while also retaining the feel of a comic book. They didn’t overtly try to make this feel like a movie, thank goodness. It’s a comic, first and foremost.

Pick up this book if you’re a hardcore or even casual fan of Alien(s), Prometheus, or just a fan of good sci-fi/monster/mystery comics.

I’ll be the first to admit I don’t know all the ins and outs of Alien or Prometheus, and I did finish this issue confused by a few things, but it’s obvious that there will be major payoffs for a little bit of patience. The story started here in Prometheus: Fire and Stone #1 is a big story, and we’re just getting our feet wet. I can see this story going in many directions and am excited to read how it plays out, especially with Kelly Sue DeConnick (Captain Marvel, Pretty Deadly, Bitch Planet) acting a lead writer of the overarching Prometheus/Alien/Predator/AvP story Dark Horse is crafting.