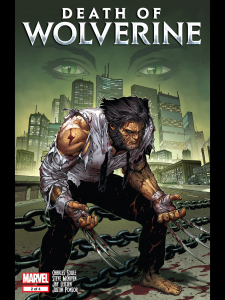 Marvel loves to say: “And this will change the Marvel Universe forever!” and though, and I think we can all agree on this, Wolverine’s death will not be forever, it will actually have a believable affect on the rest of the Marvel Universe.

Wolverine is everywhere. He’s even made a wonderful appearance in Ms. Marvel. His death will impact so many books; it will be interesting to watch how Marvel’s amazing writers handle the loss of their most go-to character.

I’ve always loved Wolverine. As a kid, he was the character I wanted to be when my friends and I were superheroes in the playground. To be fair, every boy wanted to be Wolverine, but I was always able to claim him due to one sentence:

The first issue gives us a book with a very different atmosphere than the second. While the first boasts the beauty and surrealism of the impending doom and a samurai’s last march, the second issue not only veers away, it kicks the car in gear and slams the gas to the floor. The moody atmosphere is replaced with something more reminiscent of Ocean’s 11. That being said, Soule and McNiven work well to balance the fun of the Ocean’s-like aesthetic with the imminent ruin looming above the growling protagonists head.

In the aftermath of issue #1, Logan wants some answers. He has to gain an audience with one who doesn’t take to audiences well, especially his. The book gives us a Logan that steps away from the savage and steps into a tuxedo. I find the parallels of how he acts to the leverage he carries in his briefcase both undeniably purposeful and wonderful. We get to see a Wolverine who must fight in a very different way than ever before. He’s vulnerable. The use of his claws could kill him. With a character whose entire basis of survival, strategy and life is dependent on one thing, the most dramatic option for development and storytelling is to take that one thing away. With the clever usage of leverage, both creatively as well as within the narrative, Logan gets an audience with the Lady.

And thus, blood is shed and history is remembered. 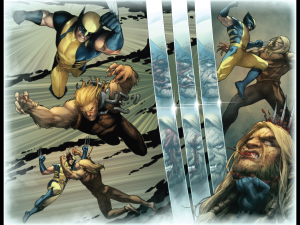 One struggle the book has is pacing, and that can account for the entire mini-series so far. Things happen, and yet, it feels sluggish. This stands even though the choreography of the panels during fight sequences is stellar. And then all the same, due to the sluggish movement of the plot, it ends almost too quickly.

With that said, the last panel is pure gold in my eyes. I’d love to explain, but the reveal is too lovely to spoil.

Buy it, or maybe just wait it out. The biggest hang up I have with this book is the required $5 for purchase. While the story is engrossing and is shaping up to be both an oddly fun, tragic and meaningful death for a beloved character, the book does not quite justify the price tag. I love the directors cut, but $5 is tough to swallow for one book. If money is not an issue: buy, buy, buy. Soule and McNiven are weaving together a story that hits nearly every beat you can hope for.