Here we go, folks. In Armor Hunters: Harbinger the kids of Generation Zero are starring in their own series. Unlike the stars of Harbinger proper, The Renegades, the kids in Generation Zero have had extensive training in their abilities. I have been impatiently waiting for this series to hit the shelves, and it does not disappoint. 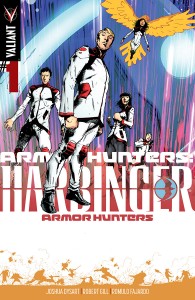 The series is scribed by the same masterful writer that has been at the helm directing the Harbinger books, Joshua Dysart. This may be a tie-in to Armor Hunters, but Dysart has presented it in a way that leaves it feeling removed yet still connected to the rest of the Valiant Universe. In Armor Hunters: Harbinger the characters are not facing off directly with the alien threat. Instead this issue looks at the young group of psyiots using their powers for relief efforts in Mexico City after the city was pretty much wiped off the face of the Earth after a nuclear-level strike was carried out.

Dysart and Gills both work at showing us who each of these characters are through glimpses of their personalities and displays of their powers. The character of Cronus is the central character so far, and he is probably one of the most intriguing as well. He is the leader of the group and his powers are healing in nature, but he breaks the mold of the superhero healer archetype. There is nowhere that states that healers have to be compassionate. I’m including a panel from the preview pages that really sums it up.

There are plenty of other characters that get their moments to shine in Armor Hunters: Harbinger. We even get to see a few old friends show up as well. I really like the different angle that the title is taking and not forcing the characters straight into any immediate battles. There is an entire world that these comics take place in, and we are getting to see more and more of it. It is one of those things that really sets Valiant apart from the big two. Not everything has to happen in a few U.S. cities.

I can’t wrap up the review without giving credit to Gills and Fajardo. There are a lot of young faces in this book, and they do not fall victim to generic kid faces. Gill gives them each their own looks and expressions. Fajardo use of colors also looks great. The tone shift throughout the issue really shows the passage of time throughout the day, and reflects with the level of danger and immediacy of the situations.

A solid buy, and a great entry into the world of Valiant. These are characters we have not gotten to know too well in the past, but this is their time to shine. Armor Hunters: Harbinger is a three issue mini-series, so pick it up if you want a glimpse of what Valiant can offer.