Origin 2 wraps up this week with issue #5, and while it was good, I can’t say that it made any earth-shattering insights into the character of Wolverine. In fact, it all felt like stuff I’d seen before. The mad scientist villain experimenting on mutants, the woman who falls for the wounded animal that is Wolverine, only to then turn on him when he does something savage. Elements of the story felt as though they were supposed to be the seeds for things that are already established in the Wolverine mythos–like the Weapon X program–but the rest just felt a little cliche. 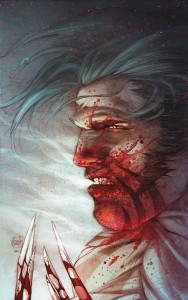 To begin, we rejoin Creed and Logan at the foot of the small mountain that is the home of Doctor Essex. Little do they know that the regenerated Clara is following them. Or, little does Logan know, anyway. Logan raids the compound with Creed behind and, after murdering a couple of dozen jack-booted thigs, finds Essex sipping wine in his bedroom. Essex tells Logan that Creed is the one who tipped him off as to where Logan and Clara were hiding and then takes a trip out a window courtesy of the man who would be Wolverine. Logan then confronts Creed, at which point Clara catches up to them. She professes her love for Logan, but the clawed savage can’t let go of what Creed did to them. Logan drowns Clara’s little brother in Essex’s sinister solution, at which point Clara does a complete 180 on Logan and sends him packing. Logan gets a poetic ending and then the whole thing is over except for a short epilogue that lets us know that the Creed family is bigger than we might have thought.

Again, Origin 2 isn’t a bad book. Just don’t expect much in the way of revelations or insight into the life and mind of the Wolverine. I will go ahead and say that I think the whole series will read better in trade, as I had to go back and brush up on a couple of points about Essex and his solution after having a month off from the story. As I said earlier, it feels like the story with Essex and his wont to turn Logan into the perfect soldier is some kind of proto-Weapon X program, but that also doesn’t feel like the most important part of the story. The main story deals with the Logan and the Creeds, and struggles with the notion of animalism and humanity. Unfortunately, it all feels like the same stuff we’ve seen Logan go through before, and with no new ideas.

The first and best reason to get this series is the art. Adam Kubert knocks it out of the park in every issue, and number five is no exception. I loved the cliche of Essex’s mansion sitting atop a snow covered mountain, and yet Kubert made the whole thing visually stunning. There are also some really great panel layouts in this issue, especially those featuring Logan kicking the crap out of one person or another. The colors are quite wonderful as well, especially to highlight the deep red of Essex’s chambers and his obvious connection to Mister Sinister. I’m hoping that when this book goes to trade there will be a deluxe hard cover that will really highlight the art and give us plenty of process images.

Wait and see. If you’re interested in this series but haven’t picked it up yet, wait for the trade. It will read better and hopefully, as I said before, do more to highlight the excellent art. If you’re not a Wolverine fan, however, and you’re on the fence about this one, maybe borrow it from someone before you make the investment. While it’s not at the bottom of the Wolverine stories I’ve read, it’s certainly somewhere in the middle.