I’m not gonna lie: I decided to pick up this new #1 of Winter Soldier based entirely on the cover. The 60’s throwback art caught my eye months ago when it first appeared in the the Marvel titles. It’s somewhere between a Bond movie and an Annette Funichello beach flick, and I just love it. Hearing that the old, going-white-at-the-temples and hard-as-nails Nick Fury was going to be in the book  just sweetened the deal. Well, now I’ve read it and I can say that I do not regret going with my gut–not one bit. 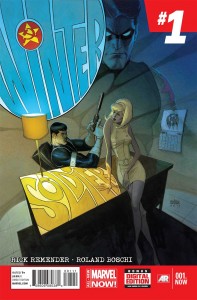 The story arc Bitter March begins with a chase down a snow-covered mountain between SHIELD agents Nick Fury and Ran Shen and a Hydra flunky. It’s 1966, and the agents are looking to liberate a couple of ex-Nazi scientists from the mountain side castle headquarters of Hydra before they divulge dangerous information. Did I mention James Bond earlier? The cavalier agents split up to see who can get into the compound first, and some serious Sean Connery stuff goes down, including an almost hookup with a scandalously dressed debutante who turns out to be a seriously nasty villain. After a daring save by Fury, the SHIELD operatives grab the scientists and beat a hasty retreat. But, there is yet another world power interested in what these Nazis have in their heads, and they send the mysterious Winter Soldier in for a retrieval. The issue ends with Ran and Fury separated in the freezing snow, scientists in tow, and the Winter Soldier in hot pursuit. And, the cover image for the next issue teases that the story will continue on a train!

Part of me wonders if this book should have been called “Nick Fury: International Man Of Mystery.” This is all the best of old school James Bond and 60’s era spy stories, coated in a candy shell of Marvel goodness. And I only want more. I’m hoping for some metal jawed, razor hatted villains, some inappropriately timed romances, and the whole package. All kidding aside, though, I believe this might be the best writing I’ve read from Rick Remender since Uncanny X-Men. To say that I’m looking forward to the next issue is an understatement. Did I mention the train?

Art by Roland Boschi isn’t perfect, but does a solid job where it needs to. Since this is a mostly “human” book–meaning that there are very few superheroes or monsters to deal with–Boschi does a good job of keeping the faces distinct and the focus of each panel where it needs to be. There are some panels here and there that look rushed, but overall he gets the job done, and colors by Chris Chuckry serve to prop up the art in places where it might falter. Boschi really shines when the Winter Soldier himself comes on the scene, who, even though he only appears in the last quarter, is certainly the most visually impressive character in the book.

Buy it. I’ve read Uncanny Avengers and Captain America and was just starting to lose my faith in Mr. Remender when I picked up Winter Soldier. Of course, it’s only the first issue, but this has been my favorite first issue in quite a while, and leaves me wanting more and more. I do hope that the art tightens up a bit as the series continues, but that is a minor problem with a book like this that does so much right. And, in the next issue, they’re on a train!