She Makes Comics is a passion project borne out of her love of comics and a desire to see greater representation of women in the medium. We talk to Director/Producer Marisa Stotter about the the inspiration behind the film, the pressure of making your first feature and how she hopes to reach the widest audience possible.

You can go check out the She Makes Comics Kickstarter here

Melissa Megan of Talking Comics wrote up a story on the Kickstarter:

From the makers of fantastic documentary films like Grant Morrison: Talking With Gods, Warren Ellis: Captured Ghosts and The Image Revolution, Sequart and Respect! Films comes a new Kickstarter that I think every comic book reader should support. She Makes Comics is a documentary project that intends to educate us on the history of women in comics, from creators, artists and executives to fans and social media mavens. “From the early days of the medium to the present, women have had an important and sometimes overlooked hand in the creation of comics. Alternative and underground comics, graphic novels, and webcomics have been particularly fruitful areas for female creators. And more women than ever are involved in iconic mainstream comics franchises.” 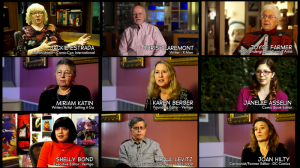 The makers of this film have big plans to travel all over the country interviewing prolific females who have contributed to the comic book industry in so many, too often unrecognized, ways. The film strives to be an oral history told by key figures from both inside and outside of the business including experts, scholars, writers, artists, actors and filmmakers. If contributing to a project that focuses on bad ass women in comics isn’t enough to convince you, perhaps the rewards lined up for backers will.

Some of the rewards: Artist Jill Thompson (The Sandman) will draw you in a page illustrating the history of women in comics. Or be drawn in to a page by Amy Reeder (Batwoman) or Kate Leth (Adventure Time). Get a custom corset for your next cosplay from Castle Corsetry. Or just get your mitts on an awesome, one of a kind film.

She Makes Comics has 23 more days to go to meet their goal. Stretch your buying finger and become a backer, or miss out on something really cool. I’m a backer already and I think this project is more than worthy of you support, too. Thanks!