The story of Legion in the pages of X-Men: Legacy is winding down to the end. Only issues #23 and 24 remain, and the looming question is, “Will the vision that Blindfold had about Legion come to pass?” It’s looking like now, more than ever, these star-crossed lovers are doomed to either destroy each other, or the world. 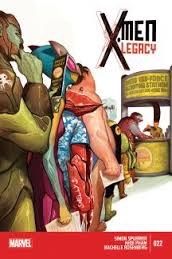 Legacy #22 continues the story of David’s struggle to gain control over his own mind. To gain that control, he must fight both the physical and the astral versions of the creature who has come to be known as “Gold Xavier.” Inside his head, Legion is close to whole–only a few remaining hold-out personalities remain. In the real world, he’s getting smarter, understanding his limitations, and becoming a leader. He calls on the X-men to help him, and for the first time in a long time we see Wolverine and Cyclops working side-by-side on a common goal. Among other things, I’m realizing that this series has been about Legion’s maturation. His time in the monastery may have helped him lock away all of his personalities, but his time since then has been about making himself whole, understanding his responsibilities as an omega level mutant, and really just growing up. I still don’t feel like I know what the Gold Xavier entity is, but I feel like we will find that out soon enough. What I got out of this issue more than anything is a sense of what could be done with Legion going forward if he is brought into the rest of the X-universe. He could be a figure that the X-Men could rally behind–he could be his father’s son.

The scope of this issue is surprisingly large for a book that receives so little hype. Both the Uncanny X-men and Wolverine’s teaching staff of X-heroes appear here, along with some other characters who have appeared in Legacy before. There is even a death or two in this issue, and I wonder if they will be dealt with outside of the title. If a story this size were to take place in Uncanny or Wolverine and the X-Men it would have been a line-wide cross over with tie-ins, like Battle of the Atom. Don’t get me wrong, I appreciate that this story takes place entirely in X-Men: Legacy, but I can’t help feeling a little guilty, like Si Spurrier is getting away with something and I’m watching it happen. Maybe that’s draw of this title–enjoying the super-fun story and the amazing covers and feeling like I know something that so many other comic readers don’t.

Khoi Pham has done some great work off and on for X-Men: Legacy, and this issue is no exception. He does really well with the weird–the giant monster villain, the entities still roaming David’s addled mind, as well as the X-Men themselves. Colorist Rachelle Rosenberg does overtime in this issue, also, with a whole rainbow of color and some crazy light effects on nearly every page. It’s a joy to look at and a big part of what makes this title so fun and different.

Buy it. Issue #22 is about the middle of the “Gold Xavier” arc, even though the story has roots all the way back to the beginning of this volume of the series. If you haven’t been reading, take a look back at the trades. I knew nothing about Legion before this series, and he’s swiftly becoming one of my favorite X-Men. I don’t have the exact sales numbers, but it seems like this book really flew under the radar for it’s entire run, allowing Spurrier to tell the story he wanted to without being bogged down in the drama of the other X-titles. Check it out and enjoy the long, strange trip.