When was the last time you read a real adventure story? Something with family secrets, strange artifacts, scary monsters, and a mysterious museum? For me, I can’t say that I remember the last time. Fortunately, Seekers of the Weird has all of that, and a bit of fun tossed in. This book feels like the young adult novels and films from back in my youth, and my inner 10-year-old loved just about every page of it. 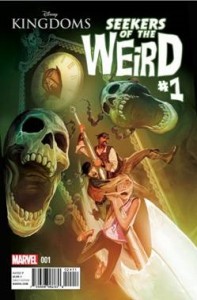 Seekers is the story of Melody and Maxwell Keep, teenage siblings who live in New Orleans above their parents’ curio shop, called Keep It Weird. Melody is athletic and feels like she’s the black sheep of her little family. Max is the quiet, bookish type who fails gym and watches Doctor Who. Their parents only appear on a couple of pages and, on this day, are too preoccupied with work to even speak to the kids about their failing grades. That night, the parents disappear in a hail of magical-artifact fire and the kids’ swashbuckling, barely-spoken-about uncle, Roland, appears on the scene. He takes the children to see The Museum of the Weird, which is somehow attached to their house, and promptly becomes incapacitated while trying to save his brother and sister-in-law. This, of course, leaves the mystery of the Museum, the disappearances, something called the coffin clock, and a whole host of supernatural stuff up to the kids to figure out on their own.

I had a lot of fun reading this book, despite a couple of small problems. First and foremost is the fact that we don’t really get to know Max and Mel’s parents, nor Uncle Roland, and so when they disappear, it’s doesn’t have as much emotional impact as it should. I also feel like the kids are not given much to go on here. I know it’s only a first issue, but the story moves into the Museum so quickly that there really isn’t enough time to establish what the kids’ skills are. I’m sure this will resolve in future issues, but this is the kind of information that helps an audience relate to and care for characters.

Overall, however, Seekers is a lot of fun. It presents the reader with a unique magical world that will be a pleasure to unravel as the issues continue, and the kids are solid enough characters to support this type of story. Also, whether good or bad, there is almost no Disney in this book. The original idea of the Museum of the Weird was to be a Disneyland/Disney World park attraction attached to the Haunted Mansion, and many of the concepts and designs of the museum came from famous Imagineer Rolly Crump. But, like I said, if you didn’t know that going in–or if you don’t read the letter at the end of the issue–you won’t find any of that in the book itself.

The art is perfect for a story of this style and for the target audience. The look is not too realistic, but also not too young or cartoonish. The monsters and curios of the Museum are wonderfully weird and over-the-top, and my favorite image of the whole book is Roland’s shotgun that seems to fire ghosts. I’m looking forward to seeing just how weird this title can get, and I’m hoping that soon we will get some major characters that are monsters or ghosts or something equally fun.

Buy it. Obviously, this book isn’t for everyone. If you’re not in touch with that 8 to 13 year old inside of you, maybe you can miss it. But then again, maybe this book can wake up that inner child. Isn’t that what Disney is all about?