I’ve made some passing comparisons before to the similarities between how we consume comic books and how we as a culture have come to consume television. Though the schedule of comics is protracted in comparison, I think the lines are easy to draw: We get single issues in a similar way to single episodes, and there are those who make sure to get each as they happen. We can also now consume TV a few episodes at a time through services like Hulu or On-Demand. Or, we can wait and read whole trade paperbacks or watch whole seasons at a time, a la Netflix. I don’t believe this similarity is as prevalent anywhere as it is with The Manhattan Projects, which I personally like to consume four or five issues at a time. What I’m noticing is that this is a book made for trade–each six issue arc acting something like a season of TV. The same characters move through settings that remain consistent but evolve with the story, but the situations change with each arc to make it unique and interesting. 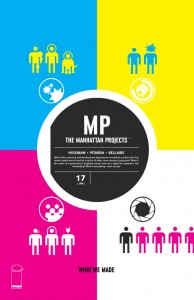 Last time I reviewed The Manhattan Projects was issue #13, which I now realize was the beginning of what I’m going to call Season 3. The scientists have broken off in seemingly unlikely pairs to work on various special projects, the result being some new and very good character development. But, the calm is broken when a new military figure bursts on the scene and tries to take over the projects by force. Most of the main characters are locked in a cell somewhere inside their own facility as Oppenheimer and the military try to figure out how all of the various projects work.

In issue #17, the salvation of the Manhattan projects appears. The fact that he’s a genetically modified creature from another dimension who talks a bit like Keanu Reeves in Point Break is just the icing on the cake. The surprising aspect of this issue and this arc is that I’ve found myself caring about characters I didn’t expect to. For example, on the surface, Feynman seems to be the innocent of the group, and maybe he is, but the real emotional core of the arc is Werner Von Braun, the ex-Nazi who is slowly becoming more robot than man. It’s refreshing to see characters evolve over time–especially when they are as gonzo as they are in The Manhattan Projects–and Hickman has done a masterful job of creating layered and interesting characters out of these fictional science monsters that, on the surface, seem like they were only created for laughs.

The art in The Manhattan Projects feels like it has remained consistent and unchanging since the beginning of the series, but the more I look at it, the more I realize how Nick Pitarra’s work has evolved with the story. In this arc alone the plot travels from the outer reaches of space to a jungle in an alternate dimension to a cell in the heart of a secret facility. There is now a giant alien who is a major character. There is a blood-crazed general with a necklace of ears on the loose. And, as the story grows more and more beyond the confines of reality, Pitarra is right there with it, keeping us in gorgeous, gorey pictures.

Buy it. This is the penultimate issue of this “season” of The Manhattan Projects and the finale looks to be something awesome. (Seriously. How better to setup the next issue than the line, “Fuck your science, doctor. I’ve got a machine gun.”) I can understand if a reader wants to read a book like this in trade–as I said, I think it’s made for trade, but however you get it, read it. This is where Hickman is doing his best work, in my opinion, and it should not be missed.