You can practically hear that familiar invitation into the unknown (accompanied by those now iconic eerie ringing notes) when flipping through this latest comic book adaptation of The Twilight Zone, one of the most far-reaching and influential television shows of all time.  For many fans of all things genre, that darkly lit threshold that was crossed with each episode represented our first explorations into the types of stories we would later clamor for, be they horror, science fiction, or fantasy.  They were tales that could make you question, even just for a second, the fabric of what you believed in and the reality you called home.  The Twilight Zone raised the bar for these types of stories incredibly high, and this new comic from Dynamite, with J. Michael Straczynski at the helm, does an admirable job in its maiden voyage of living up to that standard. 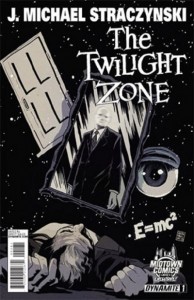 Probably the most noticeable aspect of the original show that Straczynski and company keep alive here is its attention to present day issues.  Rod Serling, the Twilight Zone’s creator, was a man who believed greatly in social justice and strived to create entertaining television that could also act as a sort of mirror to the problems of society, thereby challenging viewers to think about what was being presented to them.  In this debut story titled “The Way Out”, we are introduced to Trevor Richmond: an investor on Wallstreet who is secretly embezzling money from his company and, as a result, is about to ruin the lives of hundreds of his coworkers by stealing their lifesavings.  Knowing that his actions will soon be found out, Richmond enlists the help of a secret company that specializes in creating new lives and identities for their wealthy clientel of war criminals, corrupt politicians and corporate swindlers.  The thief thinks he’s about to get away scot-free, but as we all know, nothing is ever that simple in the Twilight Zone.

This first installment in what will be a three issue arc plays out as you would expect it: we’re introduced to Richmond, the people in his life, and the mysterious company that he seeks help from.  All the players are laid out, and though it’s done in a mostly interesting way, this deliberate structure causes the pacing to come off as slightly slow.  But it’s a good kind of slow.  It’s the same kind of painstaking care you can find in some of the best episodes of the original show.  Although you don’t know much about Richmond’s background, by the last page you really feel you have a good sense of his character and, most importantly, are ready to see the skeeze-bag go down.

Overall, the only real negative point that can be made about this issue is its art.  The quality varies from page to page: some look beautifully detailed and structured, while others appear to be rushed and sloppy.  As a whole, Guiu Vilanova’s art gels well with the tone of the story but hopefully we’ll see a little more consistency in the next issue.

Buy It – Fans of the original shouldn’t be disappointed here.  The Twilight Zone #1 is an intriguing first issue that will suck in your attention like a pit of quicksand.  J. Michael Straczynski does a nice job of maintaining the show’s atmosphere and style while giving it a modern day update, something that has proven very difficult in past efforts by others.  Definitely give it a try.