FacebookTwitterPinterest
Having recently chatted about The Huntress & Batgirl on the Talking Comics podcast, I thought it a fine time to revisit the TV series “Birds of Prey”, which had a 13-episode run on the WB network in 2002-3.

“They are the Birds of Prey…  and this is their story.” (Alfred Pennyworth, as played by Ian Abercrombie)t

Having recently chatted about The Huntress & Batgirl on the Talking Comics podcast, I thought it a fine time to revisit the TV series “Birds of Prey”, which had a 13-episode run on the WB network in 2002-3.

Developed by writer/producer Laeta Kalogridis (although she would be forced off the project shortly after the pilot was shot), the show is set within it’s own continuity, neither Earth-One nor Earth-Two.  In this “New Gotham”, The Huntress is Helena Kyle, daughter of Catwoman and Batman. After the murder of her mother, she partners with Barbara Gordon–once Batgirl, but after her shooting and subsequent paralysis at the hands of The Joker, now Oracle, the cyber-crimefighter.  The third leg of this triangle arrives in the person of Dinah Lance, a teenage runaway (who is the daughter of the Black Canary!) who comes to New Gotham because of psychic visions of Barbara and Helena, and which drive her desire to be mentored as a hero. It being Gotham, there are, of course, criminals—some  old-fashioned crime bosses, some of the super-villain variety—and hoping for the top spot is one Dr. Harleen Quinzel, who is better known to the underworld as Harley Quinn, paramour of the fallen Joker, and who is played to a wicked tee by Mia Sara (“Legend”, “Ferris Bueller…”).

The actresses who assayed the lead roles were uniformly well-cast, able to handle both the emotional and physical demands of these complex characters. As The Huntress, the feline Ashley Scott struck a perfect chord, balancing grace with an underlying inner turmoil, while Canadian new-comer (…and amateur hockey player!) Rachel Skarsten made Dinah’s transistion from awkward beginner to burgeoning hero utterly believable. The standout for me though, was Dina Meyer as Barbara Gordon. Her most notable credit to this point was “Starship Troopers”, which I dimly remembered her in, but after “BoP”, for myself and other fans of the show she’d forever be Oracle. Ms. Meyer was the epitome of resolve and courage in the role; her calm assurance in the face of myriad dangers became the bedrock for the entire series. 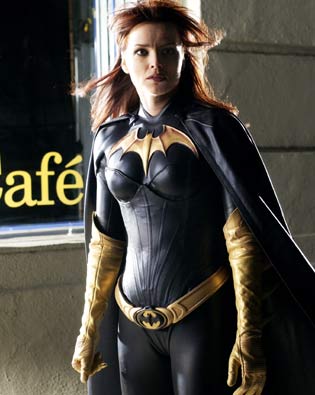 The plots attempted, and mostly succeeded, at juggling meta-human action sequences with a believable emotional undercurrent, as well as a nice helping of realistic humor that never devolved into the “self-winking” parody that often plagues super-hero shows. A thread running through a good portion of the episodes was Harley’s attempt to bring chaos to New Gotham via the use of a series of meta-human henchmen, all while she was treating Helena for anger management, never realizing that her patient was also responsible for her increasingly-maddening defeats.

The show premiered to high ratings, but they fell away swiftly, leading to pre-emptions and eventual cancellation. To Warner’s credit, they allowed the “BoP” creative team to wrap up the season’s over-riding “Harley” story arc with a grand flourish of a final episode. As to why the drop-off in Nielsens—I would dispute as incomplete the notion that it was too much of a “super-hero chick flick” (“cheep” pun intended), although some viewers may have been unable to see beneath the surface. The show’s demographics were good amongst young people and women, so I tend to believe it’s problematic ratings were related to the fact that many “little boys” just don’t like to play with female action figures, or read comics with female leads, but who really knows?

Unfortunately, for those of us who loved “Birds of Prey”, we never got to see a second season that may have featured a new Black Canary (or the return of the original), the deepening relationship between Helena and police Lt. Jesse Reese (Shemar Moore of “Criminal Minds”) or, just dreaming here, full-blown appearances by Batman or The Joker. Thankfully, after years as one of the most-seen bootleg sets at conventions, the entire series is available as a 4-disc DVD box.

VERDICT: “Birds of Prey” was a solid show that somehow didn’t find an audience in it’s time; there are flaws, particularly in that series creator Laeta Kalogridis didn’t have a chance to put her more accurate-to-the-comics vision for “BoP” on the screen, but if you’re a fan of super-heroics in general, or strong female characters in particular, give it a try—I don’t think you’ll be disappointed!

Yes, that is the voice of Mark Hamill as The Joker in the pilot episode’s  opening!

Check out http://www.gothamclocktower.com/ for a web-site devoted to the show; it hasn’t been up-dated in a long time, but the archived information is still a lot of fun!

Soundtrack:   Here’s a cool compilation of scenes from Birds of Prey that will give you a feel for the tone of the series. It’s set to the Aimee Allen tune “Revolution”, a song that was used during the show’s on-air run, but that has been sadly changed out for the DVD release, most likely to copyright issues.