Trinity of Sin: The Phantom Stranger #14

With the announcement of the ‘Blight’ storyline earlier this year, even I had to admit it was hard not to balk at the notion of an 18-part crossover spanning what most would consider ‘middling’ titles at a publisher.  Fearless in the face of these grumblings, J.M. DeMatteis looks to be utilizing this storyline to also serve a greater purpose above the surface tale being told though; bringing the casts of the various titles within the Dark line into a more cohesive subsection of the DCU. 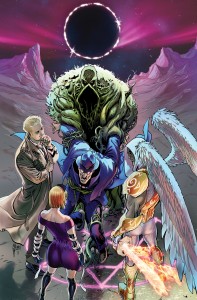 With his previous team lost in the climax of Trinity War, Constantine now turns to the mystical entities known as the Trinity of Sin (Phantom Stranger, The Question, and Pandora) to ask for their aid in his greatest undertaking to date: to rescue his friends by slaying Evil itself.  With the guilt of sin weighing heavily on his soul though, will the Phantom Stranger be willing (or able) to help stand against the very evil that lives in his heart?  And can these three mystical juggernauts set aside their own issues long enough to find out?

DeMatteis has been performing quite the high-wire act since taking over this title with issue 6 in May.  Steeped in philosophical and religious history, he has managed to capture the environments and themes that surround a character like Judas Iscariot without browbeating the reader with religious subtext.  It’s a difficult thing to do, but it does keep the character interesting in issues like this one where he is forced to interact with his more eccentric compatriots within the Dark Line.  And really, that’s what this issue is; the forced interaction of practically all of the Dark line of books in order to solve a larger problem.  While this may not be everyone’s cup of tea, it is certainly nice to see a natural progression in the relationships of each of these similar characters (even if by line of books only).

The artwork from Blanco follows suite with DeMatteis’ storytelling to a ‘T’, invoking the mood and iconography of this biblical character without the vibe of preachiness.  Capturing the environments that made the Phantom Stranger who he is (and in some cases, exploring other facets yet to come to light), it is the natural flow from these period pieces into the standard comic-bookery containing the other DCU denizens that made his efforts stand out in this issue.  Betraying some of his hard work though, there were a few panels that seemed slightly muddled, though with the surreal nature of parts of this issue this could have been intended.  Overall, the great staging to get around the fact that this was a conversational issue more than makes up for those very slight inconsistencies though.

Tentative buy.  Are you intrigued with the mystical magical mumbo-jumbo of the DCU?  Looking for a tightly-integrated collection of books that are feeding off of one another to tell a greater story?  Can you enjoy a tale that is more intricate in its storytelling and less action-intensive?  If you answer yes to these, I would certainly recommend checking out the ‘Blight’ storyline thus far.  For while it will most certainly be a Blight on your pocketbook, it does look to be setting the stage and status quo of these characters for some time to come.