What happens when people are placed in desperate situations? In Batgirl #25, Marguerite Bennett examines how everyday people transform into heroes during a crisis. She looks at the other side of the coin in turn. How do law-abiding citizens become petty thieves or murderers because of chaos? This is Gotham City, after all. As a Zero Year tie-in, this issue feels especially timely in the wake of Typhoon Haiyan in the Philippines. 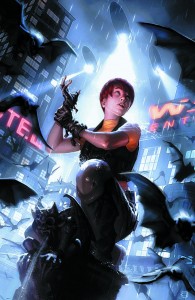 A gunman confronts Barbara Gordon as she brings home what little groceries she can find during the blackout. If you haven’t been reading Batman (shame on you!), Marguerite Bennett brings you up to speed pretty quickly. Essentially, there’s a blackout in Gotham along with a storm flooding parts of the city. Barbara manages to get home safely and reflects on how a man can be willing to kill over a loaf of bread.

There’s a touching scene with Commissioner Gordon as he leaves his family behind to protect the city. Fernando Pasarin does an excellent job communicating the strength of Commissioner Gordon’s relationship with his daughter. It’s up to Barbara to protect her little brother from harm as the storm forces them to evacuate their home. Two panels effectively convey Barbara’s sense of loss as they leave their home for higher ground. From there, a significantly younger Barbara shows her ability to overcome difficult situations and foreshadows her life as a superhero.

A minor quibble about this issue is Bennett’s reliance on repetition. At first, this effectively adds to the exposition and shows how Barbara’s thinking becomes more focused during the crisis. Then it loses its effectiveness and becomes mildly annoying. Overall, Bennett does have a firm grasp of Barbara’s voice and makes an easy transition from regular Batgirl scribe Gail Simone.

I’ve criticized Pasarin in past reviews about his facial expressions. He shows significant improvement in this area here. Pasarin is able to work on a larger scale with a powerful one-page spread of the flooding. It’s nice to see his range beyond the standard superhero fare.

The Verdict: Buy It! There’s a lot of Babs to love here with her penchant for optimism and resilience. For Marguerite Bennett, this is a solid first outing on Batgirl and works well with Simone’s ongoing story. Having a consistent art team in Pasarin and Glapion enhances the experience significantly.