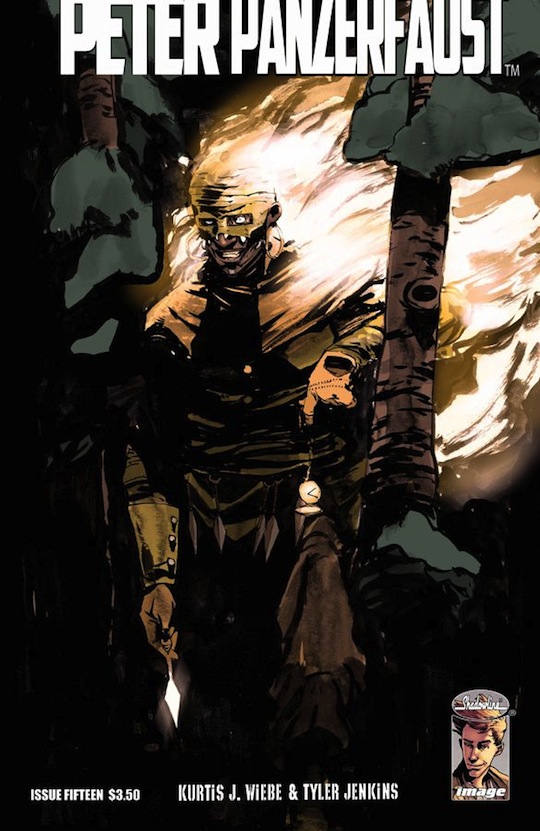 Issue #15 brings about an emotional close to the third arc of Peter Panzerfaust. As with previous arcs, this one was centered on the recollections of one of the “Lost Boys,” Felix is definitely one of the more emotionally complex characters that Wiebe has introduced in the series. For most of the first two arcs he was held captive to the German military, so we had very little connection to him before issue #11.

Now that the “Cry of the Wolf” arc is completed I think it is fair to say we have a pretty solid grasp on the inner turmoil and frustrations of Felix. Wiebe has shown us that even though he is the loner of the group, Felix fights with a cunning and tenacity to protect his friends that borders on ruthlessness. The last half of this issue is devoid of any word or thought bubbles and relies purely on the art to show us why Felix fights the way he does, and why he remains a loner.

The Crocodile appears briefly in the opening pages of the issue, but what is most important is seeing the conclusion of events between Jacques, and Felix. Wiebe reminds us that even in war there can be honor among enemies. Following these events, it will be interesting to see if the Crocodile makes a return in the next arc, as he has become even more of a mystery than he was at the end of issue #14.

Jenkins does an excellent job of carrying the latter half of the issue, and is able to showcase Felix’s past experiences with grace. We are shown whom he was growing up, and what has shaped him into the man he is today. I’ve given her praises before, but Breckel really is the unsung hero on this team. She adds depth and layers to the characters with her colors that makes them even more convincing than they already are.

This issue has re-injected some of the deeper emotions that run throughout the series. It shows off the collaboration of the entire creative team and how the amazing work they put into Peter Panzerfaust. This book wasn’t a huge sales hit, but Wiebe and Jenkins are striving to complete this out of a passion for the project, and it truly shows. If the next and final arc contain as much of the heart and soul we’ve been given so far, then we are in for a real treat.

Peter Panzerfaust #15 brings about a satisfying and emotional finale to Felix’s arc. New readers might be a bit lost with this issue, so start from #11 or wait until the next issue.