“This cover punches me right in the feels. There is something truly majestic and pure about it, and that is a rare find inside the pages of Saga. Ms. Staples has outdone herself with this one. I might need to look for a print of this at NYCC this year.” – Steve Seigh

“If this one doesn’t tug at your heart strings, I don’t know what will.  I love the relationship that that has been developing between Gwendolyn and Sophie/Slave Girl, and am pumped they’ll be exploring it more in this issue.“ – Patrick Brennan

“This cover is hot. I dig the overwhelming presence of hot pink on black and white, and the book strategically covering the woman’s naughty bits makes me chuckle. So immature, I know.” – Steve Seigh

“It’s all about the art style for me in regard to this cover. I haven’t had the chance to read it just yet but you can be sure that it’s at the top of my list.” – Steve Seigh “Gorgeous, gorgeous, gorgeous! Yeah, Widow and Spider-Woman are looking mighty fine on this painterly cover. I love the “dead serious” looks on our heroes faces and I can’t wait to see how the events of this issue shake out.” – Steve Seigh 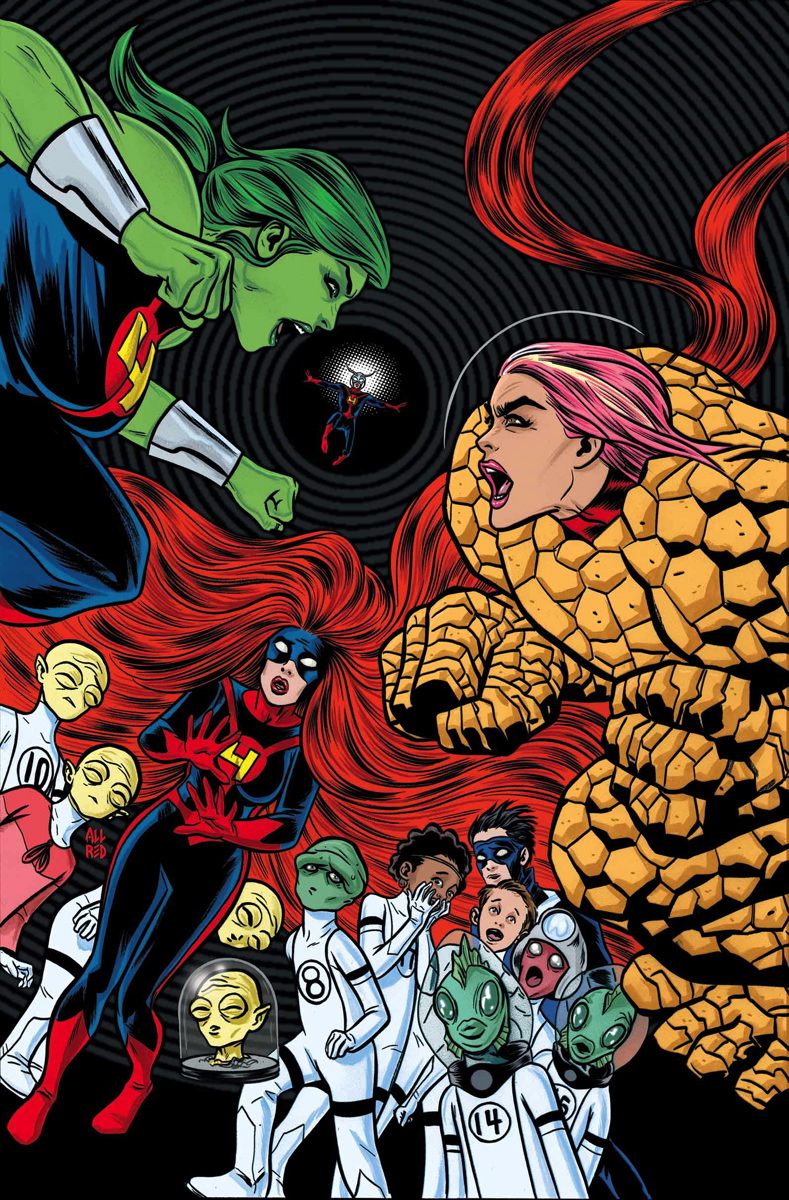 “Things” are looking “rocky” around the old Baxter Building! (Sorry!) It may not be the classic Hulk vs. Thing battle from the original Fantastic Four #12, but if the cover by Michael Allred is any indication, this issue should be a lot of fun! Next issue: the Red Ghost and his super-apes?” – Bob Reyer

Art and cover by Takeshi Miyazawa and Adam Warren “As with the last special, Adam Warren is sharing art duties, this time with manga creator Takeshi Miyazawa, who is agreat fit with the manga stylings of Mr. Warren.Mr. Miyazawa’s foreground figures absolutely pop against the Warren backgrounds! (Can you find the nine beers on the cover?)” – Bob Reyer

“I haven’t been reading this series, but this cover really grabbed me.  The detail in what we see of the fortune teller is awesome, with the creepy nails being a highlight, and Gambit looks especially badass.” – Patrick Brennan “If you told me that anyone could pull off looking this good in a red flying squirrel suit, fighting a bear with a flare on the frozen side of a mountain somewhere (rhyming is all in the timing :-)), i would never have believed you. And yet, it’s glorious. This needs to be on a heavy metal album cover, stat!” – Michael Duke

Art and cover by Dave Marquez

“It looks so good, I want it to be real. One part drama to ten parts metaphor, this one looks good enough to go on the wall.” – Michael Duke

This list was compiled while watching this performance presented by Aaron O’Keefe. A bunch of his students were selected to rock the shit out of the song “46 & 2” by the band Tool and boy did they ever! This is some serious talent here. Be sure to watch this one! Enjoy!