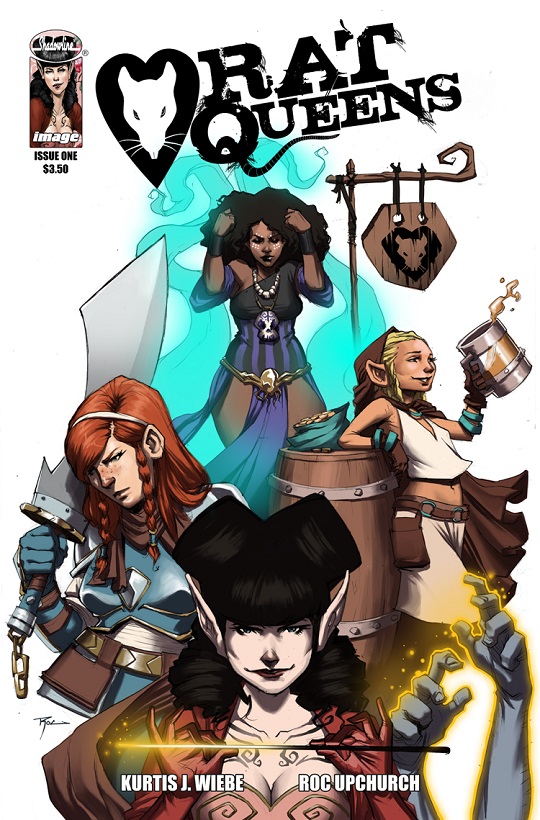 I remember hearing about Rat Queens a while ago, but with life going on it fell of my radar completely. When I took a look at this first issue, I was completely taken by surprise and almost instantly fell in love with it.

Wiebe has been able to capture the humor found in many of the early millennia “Frat Pack” and more recent Apatow movies. It’s set in a fantasy world and filled with crude humor, much like 2011’s Your Highness (but Rat Queens is actually funny). The big exception being that this story revolves around a group of women who like to party, get drunk, and cause destruction around the town.

From the get go we know that even though these girls like to get their drink on, they are a fearsome group. They are strong, confident, and give very little in the way of f**ks. I love the contrast in attitude with the bright, colorful art style of Upchurch. It exudes a subtle cuteness to it that might deter some people from picking up the series based on as casual flip-through, but I feel this really works to Rat Queens advantage. Wiebe and Upchurch are playing with most readers’ pre-conceived notions of girls’ comics or manga. It takes everything you think you might be getting from a “cuter” comic about an eclectic bunch of girls and throws it back in your face hard enough to split your nose open and maybe choke on some blood.

By the end of the issue, I had almost forgotten about the quest the girls were sent off to do in order to avoid lockup on account of the previous night’s drinking binge. Learning more about the world and who these girls are more than makes up for that. My forgetfulness isn’t related to any problems with Wiebe’s writing, and is related more to getting sucked in to the dialog and interaction between the team. It was engaging, hilarious, and felt real. There was a lot of shit talking, and it made these girls feel “like one of the guys.” I don’t mean that in any sexist way; they reminded me of the trash talk I have with some of my friends. That is why it felt real. The relationships here can remind any one, guy or girl, with the ones they share with their own friends.

Pick this up. It’s a lot of fun, and after one issue you should feel some connection to the characters. It’s a whole bucket of fun. If you are someone that is easily offended from crude language, then you might want to skip this.