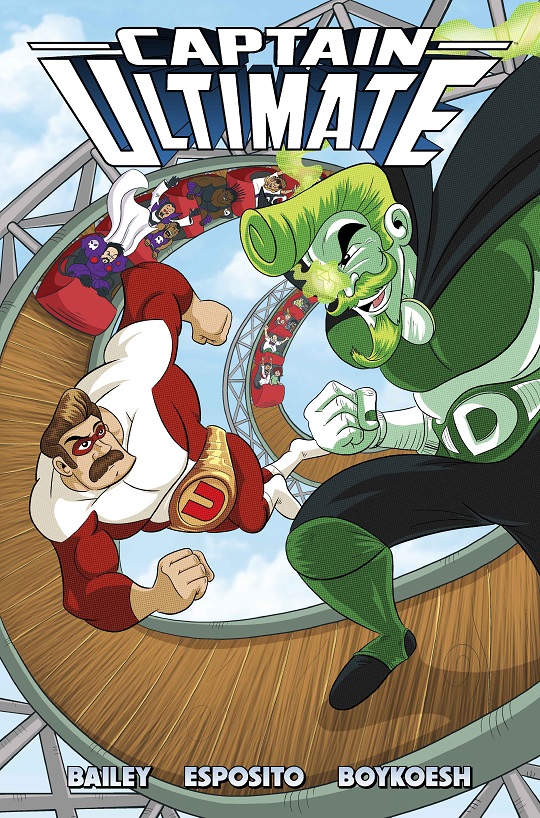 In a market saturated with superhero comics, Captain Ultimate is a breath of fresh air. The series is an all-ages comic that strays away from some of the darker tones we find in the medium today. Captain Ultimate showed up near the end of the first issue, but we get to spend more time with him in issue #2. He is very much the old school hero that has been advertised.

I enjoyed seeing the veteran hero in action against one of his old super villain nemesis, Dr. Destruction. The fight between these rivals exudes that Saturday morning cartoon style that Akkerman established in the first issue, and the tone is kept upbeat and light with Ryzowski’s colors. Everything about issue two felt very welcoming, so if you missed the first issue, don’t be afraid to jump on here.

Bailey and Esposito also use this issue to introduce some new characters to the cast of Captain Ultimate. We are introduced to an old pal of the Captain and to Milo’s family. As an all-ages comic, it’s capturing that family vibe found in the classics. Like Lee and Kirby’s Fantastic Four, there is some bickering in this family, but they are able to compromise and reach a solution that benefits everyone. I like seeing the family element that is often missing in more mainstream titles.

Captain Ultimate is an all-ages comics, but that shouldn’t scare more mature readers away. It might not be for everyone, but it definitely had something to offer for anyone of any age. For me, it reminds me of the camaraderie and bonding I had going to comic shows, digging through old boxes with my dad, and the silver age comics we bought and read together when we got home.

Whether it’s for your kids or for yourself, you are doing yourself a disservice by not checking out the series. Issue #2 builds off of what was established in the first issue, but is designed to stand alone on its own. Being that both issues are only 99 cents, you might as well grab them both!