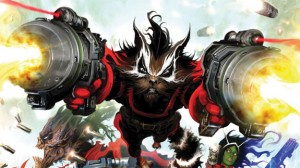 Bradley Cooper was reported to be in talks to play Rocket Raccoon earlier this month. Today he was officially confirmed as joining the cast for Marvel’s upcoming Guardians of the Galaxy. More accurately, he’ll be voicing the character. The foul-mouthed alien, known for wielding massive firepower, will be depicted as realistically as CGI can make an anthropomorphic Raccoon.

Cooper will be joining Dave Bautista, Chris Pratt, and Zoe Saldana. They will play Peter Quill/Starlord, Gamora and Drax, respectively. Vin Diesel is rumored to be the voice of Groot, but an official announcement has yet to be made.

Rocket Raccoon debuted in 1976, and had his own mini-series in 1985. However, it wasn’t until his inclusion in the 2008 Guardians of the Galaxy reboot that the character hit its stride. The book reintroduced and modernized several forgotten Marvel characters. Now the Guardians will be the first lesser-known Marvel properties to hit the big screen.

Still, with all the hype and success of the Marvel cinematic universe thus far, it’s likely to be a hit. Thanos, who appeared in the Avengers‘ post-credits scene, will have a role in Guardians. The film will also surely continue to set up the events that will culminate in The Avengers 2.

Are you excited for Guardians of the Galaxy? Do you think Bradley Cooper is the right choice for the role? Sound off in the comments below!