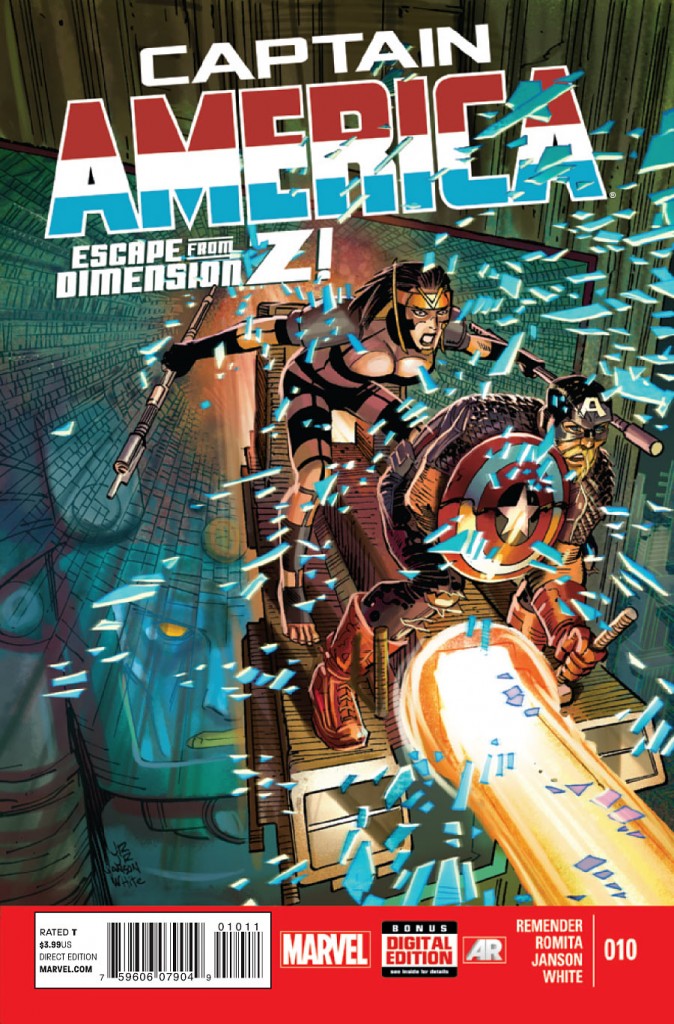 Whatever shall we do with Rick Remender? I find myself sometimes wondering, as I do with many of my favorite writers, what the inside of his head must look like. For Remender, I imagine it looks like one of those cork boards that you see in movies and TV–pictures and clippings and crude drawings all tacked to it overlapping. Long pieces of colored string link some of the clippings to other pictures, all of this stretches out into the physical space of a bare, concrete-floored room. Additional hanging bits of information link to other bits until someone walks into the room and goes, “Whoa,” with the kind of look that questions the sanity of the person who put it all together. In the worlds of Rick Remender, nothing is as simple or isolated as it seems. Everything is connected to something else, not matter how obscure or distant.

In Captain America, Remender famously took the hero on a science fiction journey into Dimension Z–a bold move since the title had been thriving on espionage and intrigue for years previous. Whether it worked or not is certainly debatable, and if you ask me now, I’m not 100% sure why I stayed on board this long. Maybe it was the nostalgia of Uncanny X-Force still lingering in my guts, maybe it was the art of John Romita Jr., who I was only familiar with before this in the pages of Kick Ass, maybe it was just a my own masochism, but whatever the reason, I stuck it out. My reward has been issue #10, the end of the Dimension Z story, and the promise of something new over the horizon.

I can say that issue #10 did one important thing for me: it helped me “get it.” I believe that I have a better sense now of what Remender’s objective was all along. And here’s what I think it was: pulp science fiction. This is B-movies and paperbacks with painted covers and old timey radio shows all put together to create something that harkens back to a bygone age. The level of camp and cliche in issue #10 of Captain America is palpable–you could cut it with a spoon–especially in the dialog, and yet, I still enjoyed it. The plot points were predictable and not all that imaginative, and yet I smiled as I read it. And the one real joy, the most important thing that I think many of the issues in this story arc were missing, is that Captain America felt like Captain America. He acted like the hero he is, spoke like the man out of time, and tried in vain to sacrifice himself for the greater good only to be saved by those who love him. This finally felt like the displaced hero I expected, and for that I think it’s the best of the series thus far.

I will concede, however, that this issue may have reached a point where Romita Jr.’s art is getting in the way of the story. I was excited, initially, when he was announced on the book, but a few issues have passed now where Cap’s face is just to battered to allow for much expression and recalls too easily panels of Kick Ass than is good for the book in general. Romita Jr.’s style doesn’t lend well to the kind of emotion that would have made this a truly stellar book, and for that I have to dial down my admiration a bit.

Wait and see. There are two surprises in this issue that will effect the book going forward as well as a small corner of the Marvel Universe, but I’m sure that they will be dealt with again, either here or elsewhere. If you fell off of Cap a few issues ago, this one might be worth the four bucks just to see how the story ends, but if you’ve been waiting to pick up the title, issue #11 is probably your better bet.