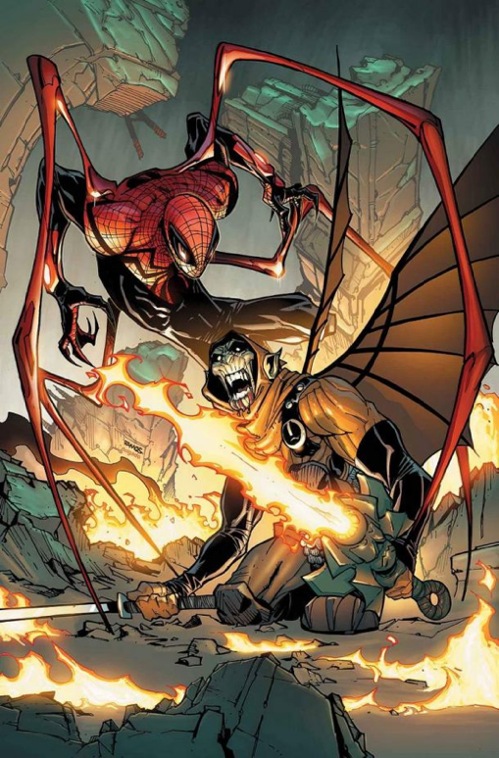 With great power comes great responsibility, but when you bite off more that you can chew power may not be enough to keep you afloat. Superior Spider-Man #17 shows us that while Otto may be a more efficient Spider-Man, he might not be a very efficient Peter Parker.

Issue #17 felt very similar in tone to some of the work Slott did during the “Big Time” storyline on Amazing Spider-Man. Since last issue, the whole Hobgoblin and goblin street gang affairs are back in the mix of things. Slott planted these seeds a long ways back, and it looks like we may start to see these events come to fruition under the watch of Otto-Spidey.

This is also one of the first issues in a what feels like a while to really deal with not just Spider-Man, but Peter Parker. Skeptic fans should be glad to see that those in Peter’s life are concerned, and Otto’s neglect of the day-to-day life, may start to have their consequences. I for one am pumped to see Carlie and Captain Watanabe delve deeper into the mystery of this “new” Spider-Man.

There are a lot of other smaller plot points from the past fifty or so Spider-Man issues that are brought up and twisted into issue #15. Noticing the smallest of details brought up from the past had my hairs standing on end and my skin tingling, because I know Slott is up to something, but I honestly have no idea what he has brewing.

Despite all the small and subtle call backs, Superior Spider-Man  #15 is a fun and enjoyable comic. There is a tussle between Spidey and the Hobgoblin, that Ramos has illustrated with the detailed kinesthetic beauty he is known for. It’s the mid-air action scenes from Humberto Ramos that I enjoy the most in the series, so there was no disappointment this time around.

Buy it. Haters, you might enjoy this issue, as things look like they may be unraveling for Otto. Of course, Slott will keep us strung along for a ways to go, but it is nice to see some of the more minor plots from previous issues coming round again. The struggle with both life as a hero and life as Peter made this feel like a Spider-Man story of yesterdays. Issue #15 of Superior Spider-Man is moving the story of both Spider-Man and Peter Parker forward.